The earliest American astronauts were lauded for their bravery, but even those early Project Mercury crew capsule designs had a... 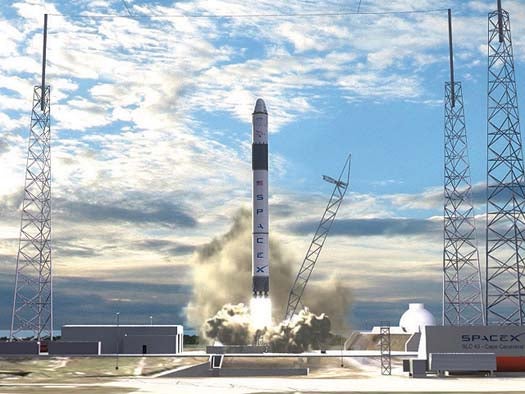 The earliest American astronauts were lauded for their bravery, but even those early Project Mercury crew capsule designs had a backup plan in the launch abort system (LAS) that, if a rocket began to explode on the launch pad, would throw the crew capsule clear of danger. The Space Shuttle has no such LAS. So now that we are returning to rocket-launched crew capsules for space travel, new methods of launch escape are emerging.

Today, we learn a little more about how SpaceX plans to keep crews aboard its Dragon capsule safe during the dangerous launch phase and beyond via New Scientist. SpaceX and Boeing have both developed schemes that dispense with the LAS towers that sat atop the crew capsules of the Saturn V and Atlas rockets of yesteryear (and that still grace the Soyuz and Shenzhou launch vehicles).

That pointy nose on those older rockets was actually another smaller rocket. In an emergency, this rocket would fire it’s motors and pull the crew capsule clear of the doomed rocket below. But if the launch went well, this LAS rocket was ditched, wasting perfectly good motors and expensive rocket fuel.

Boeing engineers already unveiled the escape mechanism for their Crew Space Transportation vehicle, CST-100, which integrates the LAS into the capsule itself via a so-called “pusher” design. Thrusters mounted beneath the capsule do the firing, pushing rather than pulling the capsule out of harm’s way. Bonus: no wasted motors, no wasted fuel. But that fuel has to be carried into orbit, and that spells added weight–weight being the arch-nemesis of any economical space launch.

SpaceX’s new LAS design is similar, but by mounting escape thrusters on the side of the capsule (still blasting downward of course), it’s possible to integrate that extra fuel into mission activities, like on orbit maneuvers or–at some point–retro rockets for landing the capsule on an extraterrestrial body.

More importantly, it furthers one of SpaceX’s most important goals: cost reduction. If the fuel can be used on-orbit, great. Even if it can’t, SpaceX’s design (as well as Boeing’s) at least save their pricey rocket motors, which can be used again. Makes those Apollo missions look wasteful by comparison.