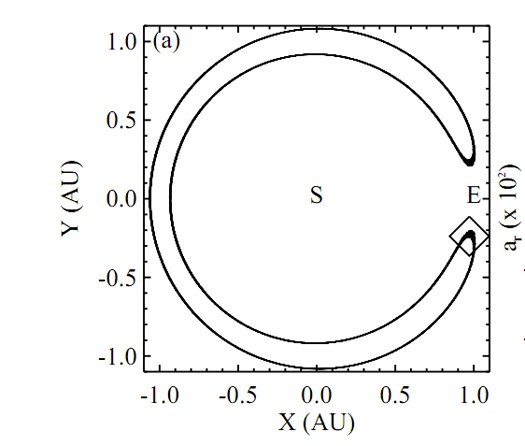 Near-Earth asteroids aren’t all that rare, but today two researchers at Armagh Observatory in Northern Ireland say they’ve found an extremely rare near-Earth object in an orbit very similar to Earth’s. Asteroid 2010 SO16 is not exotic because of it’s closeness to the home planet, but because it is stuck in a rare horseshoe orbit.

Horseshoe orbits only happen under a specific set of circumstances, so it is believed they are pretty rare. The name “horseshoe” is derived from the shape of the object’s orbit as seen from Earth–that is, it doesn’t stop mid-orbit, turn around, and travel in the other direction. It has everything to do with shifts in the object’s orbital path and our perspective of the object as it gets closer, shifts orbit, and then gets further away without ever passing Earth.

To better understand this, one only needs to keep in mind that objects closer to the sun orbit faster and objects further away orbit more slowly. So here’s what happens: the asteroid is in a slightly smaller orbit than Earth’s, and thus moves faster. But as it approaches Earth on the inside track, the Earth’s gravity begins to pull on it. As Earth pulls the asteroid toward it, the asteroid’s orbit grows larger and it begins to orbit more slowly.

Eventually Earth pulls the object to an orbit slightly outside that of Earth’s–now it is moving more slowly than the planet and Earth begins to pull away (or, from our perspective, the asteroid approaches on the inside, moves to the outside, and begins to recede away from us).

Many, many years later, Earth catches up to the asteroid on the other side, at which point the process works in reverse: Earth slowly approaches the slower asteroid from behind, its gravity pulls the asteroid back toward the inside orbit, and the asteroid speeds up. From our perspective, we’re getting nearer the asteroid, then it begins to move away again. At no point does the asteroid pass the earth, nor does the Earth pass the asteroid.

So the asteroid orbits the sun in the same direction at varying speeds depending on its orbit, but from our perspective it never appears to close its orbital loop (see the diagram above). Hence: horseshoe orbit.

Right now, SO16 is near one of its closest points of approach, chasing the Earth on its inside orbit. As such it will be a fixture in the sky for the next few decades, the researchers say, until it is pulled all the way over into the outside orbit and it slowly recedes from view.

The full paper is here (PDF).