In 2009, we marveled at GigaPan, technology that sews together hundreds of photos to make a ultra-high-res image that you... 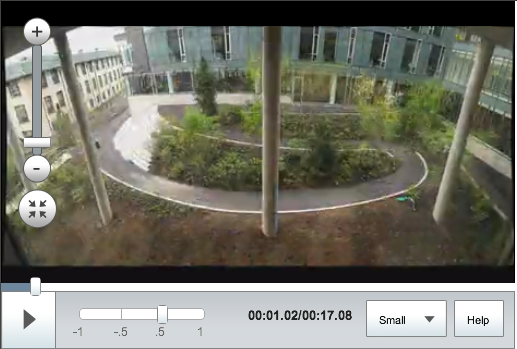 In 2009, we marveled at GigaPan, technology that sews together hundreds of photos to make a ultra-high-res image that you can zoom in and out of. Now GigaPan has introduced Time Machine — which adds the miracle of time-lapse photography to create gigapixel-scale videos that you can play forwards and backwards in a range of speeds.

With the same incredible level of detail that GigaPan’s earlier photo project provided, the GigaPan Time Machine site features several different worlds for the avid time traveler to explore. You can zoom in and out of early universe phenomena, track stinkbugs during plant growth, and follow the intricacies of brain veins. You can even make your own time machines.

The GigaPan Time Machine builds on the work of the previous GigaPan project, which allowed the user to zoom far into each photo while retaining the original resolution–because each photo was actually a mosaic made up of many other photos, taken at different ranges. Time Machine adds a fourth dimension, allowing you to zoom in, out, and around while also moving through time.

Time Machine is built with HTML5, the newest revision of the HTML language. Its capabilities, especially the ability to play video in a browser without the need for plugins, allows more seamless and less-bandwidth-intensive video playback. Plus, it means that what could be merely a tool for scientists is also a ton of fun for the curious everyday internet user, which we assume you are. You can check it out here.