As helicopters drop tons of water on the fuel rods, a U.S. Global Hawk drone monitors the situation from above 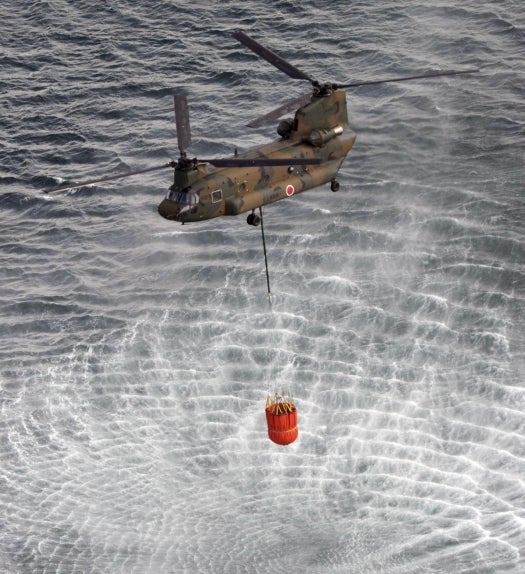 The aerial water bombardment of Japan’s Fukushima Daiichi nuclear facilities began in earnest late yesterday after being deemed too risky earlier in the week. The strategy–previously untested as far as we know–is aimed at cooling the reactor cores and spent fuel rod storage pools, but it’s highly unclear whether it’s doing any good. The choppers are dropping their payloads on the go, presumably out of radiation fears, and as such Japanese authorities can’t ascertain whether any of the water has actually been delivered to its targets.

Helicopters aren’t the only aircraft in the air over Japan’s stricken nuclear plant today. The U.S. Air Force is dispatching a Global Hawk UAV from Guam to Japanese airspace today to gather high-resolution images of the situation at Japan’s nuclear facilities and perhaps even peer into the damaged reactors and cooling pools from above.

The Global Hawk has been gathering aerial data for days over other parts of Japan in order to assist with relief efforts, but this will be its first attempt to assist in the ongoing nuclear crisis there. And the Global Hawk is well suited for the job; Aside from being unmanned (it is a radioactive mess down there, after all), the Global Hawk’s sensor array includes heat-detecting infrared sensors.

That means the UAV can gather imagery showing where the hot spots are, what parts of the reactors may be closest to rupture or other damage, whether or not fires have been completely extinguished, and, over time, the effectiveness of different methods of cooling.

At this point, those methods are diverse. The remaining workers on the ground are braving elevated radiation levels to direct fire hoses at the various overheating elements within the complex, and that previously-scrubbed strategy to drop water from above via firefighting helicopter has now been initiated as the situation becomes more desperate. The effectiveness of the water-bombing at this point is unknown, though it doesn’t appear to be doing much good. May we recommend a bigger bomber?