Finding advanced alien races in other parts of the galaxy isn’t so hard, according to Duncan Forgan of the University... 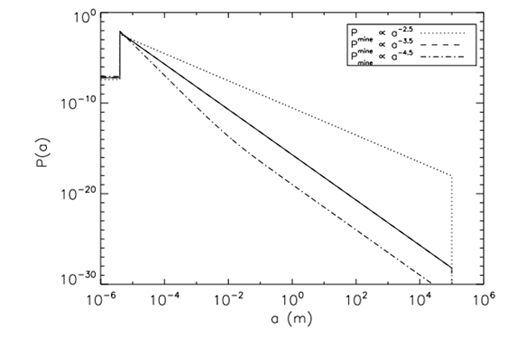 Finding advanced alien races in other parts of the galaxy isn’t so hard, according to Duncan Forgan of the University of Edinburgh and Martin Elvis at the Harvard Smithsonian Center for Astrophysics. Rather than look for direct evidence of cloud cities anchored to far-off rocks, we simply need to ask ourselves what our civilization might look like in the future, then look for signs of that. Specifically, we need to look at other planetary systems’ asteroid belts for signs of mining.

The idea is that at some point, our home planet will run short of natural resources, and when that happens we will have to tap asteroids for sources of metals and other materials that will enable future economies and technologies. Any other advanced, intelligent civilization would likely face the same challenge, and by scanning faraway asteroid belts for signs of interplanetary mining operations, we should be able to pick up signs of life with current and future telescope tech.

Extrasolar mining should produce three types of signatures that we can detect from Earth, Forgan and Elvis write in their paper. First, we know that debris belts contain certain ratios of elements, and using spectroscopy we could spot rings in other systems where those ratios are off. Second, it makes sense that we (and any other civilization) would mine large asteroids first rather than small ones, so we could monitor debris rings for artificial drops in the number of large rocks (also doable from earth).

Thirdly, all the dust kicked up by mining activities would absorb heat from the nearby star, generating an identifiable thermal signature. Find all three of these indicators in the same place, and you’ve probably got extrasolar mining going on and an intelligent race of beings to make contact with. Right?

Not exactly. Forgan and Elvis concede that all of these indicators can also occur naturally. So their asteroid-belt stress test for mining isn’t exactly a hard indicator of intelligent life. But, they say, monitoring for these telltale sings would help us flag solar systems that should get a second, harder look. And since planet hunting missions are already scanning the skies for some of these things, why not peruse the data for them?