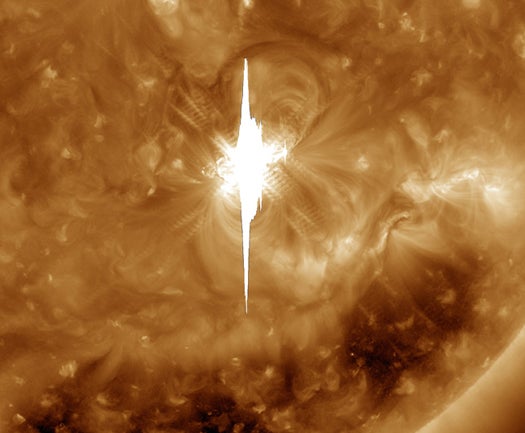 It's the largest flare on record since December 2006. NASA/SDO
SHARE

It appears Tuesday’s massive solar eruption is already impacting communications in southern China and may disrupt satellites in orbit and electrical grids on the ground over the next few days. The X-class flare is the most powerful seen in four years.

“Ground to air, ship to shore, shortwave broadcast and amateur radio are vulnerable to disruption during geomagnetic storms,” the U.S. National Weather Service said in a statement regarding the incoming solar activity. “Navigation systems like GPS can also be adversely affected.”

But as in all storms, solar or otherwise, dark clouds always have silver lining. The British Geological Survey reports that the increased solar activity should bring spectacular Northern Lights displays further south than usual, dazzling Brits with a rare view of a really active aurora borealis. Hopefully the lights in the sky won’t be the only ones left burning after the solar flare hits.