Scientific observations often has to do with being in the right place at the right time, whether intentionally or not.... 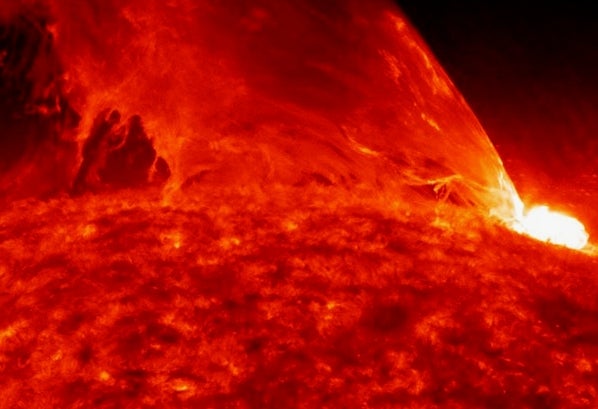 Scientific observations often has to do with being in the right place at the right time, whether intentionally or not. In a stroke of good luck last Thursday the sun’s rotation, NASA’s Solar Dynamics Observatory, and a sizeable M 3.6 class solar flare all lined up to allow SDO to capture a gorgeous profile view of said flare unfolding in high definition.

The resulting 16-second video released by NASA over the weekend captures the 90-minute solar event at a cadence of one frame every 24 seconds, creating a time-lapse of the eruption spewing, twisting, and collapsing back to the surface, giving the illusion of seamless motion though the actual event moved more statically.

Unlike the massive solar flare that disrupted communications on earth and spawned beautiful auroras in the Northern Hemisphere earlier this month, NASA says Thursday’s flare was directed away from Earth and does not pose any threat.