Google’s Street View technology lets you stroll faraway boulevards and take in the architecture of distant cities. Now it will... 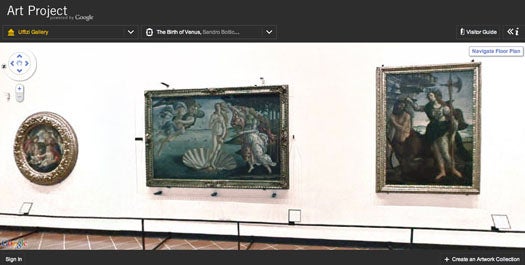 Google’s Street View technology lets you stroll faraway boulevards and take in the architecture of distant cities. Now it will let you wander some of the world’s great art galleries, sampling a smattering of the world’s most popular artworks in super high-res.

The Art Project doesn’t allow you to tour all the museums in their entirety—that’s for paying patrons—but using a pared down Street View car known as “the trolley,” the mapped more than 385 rooms across the 17 galleries, collectively representing thousands of works. Many works have been individually imaged, allowing for a better resolution examination of individual works that allows users to zoom around a canvas.

Moreover, each gallery selected one work to image with extremely high-resolution “gigapixel” tech, allowing users to zoom in on features and details not even visible to the human eye (it’s a very Ferris-Bueller-at-the-Art-Institute-of-Chicago kind of experience). Indulge your cultured side here or check out the visitor’s guide below.