Google Plans to Launch Disruption-Tolerant Internet Into Space This Year

Talk about cloud computing. Google wants to install “InterPlanetary internet protocols” (IP IP?) on spacecraft, using them as an interwoven... 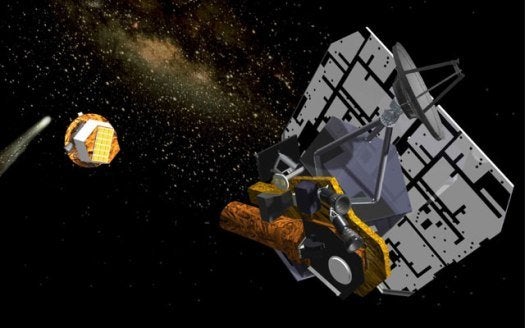 That’s according Google’s Chief Internet Evangelist, Vint Cerf, in an interview with Network World. And this is not some pie-in-the-sky idea — they’re already doing it.

This week we heard a lot about Comet Tempel 1, into which NASA smashed a probe a few years back and to which it returned via the Stardust probe. What we didn’t hear was that Stardust’s mission partner, EPOXI (formerly called Deep Impact), has apparently been updated with these new InterPlanetary protocols, and Google has tested it at 80 light-seconds.

Cerf explains that Google realized as far back as 1998 that space-based Internet has problems that don’t face the traditional Internet design — speed-of-light communications are instant on Earth, but at interplanetary distances, that’s slow, and can cause problems. An interplantary network could help overcome these problems.

The approach uses delay-tolerant networking, or Bundle Protocol, as distinct from Internet Protocol. The International Space Station uses Bundle Protocol, which defines blocks of data as a bundle, each of which contains enough information to avoid processing interruptions even in a delay.

This year, Google wants to standardize the interplanetary protocols and make them available to all the space-faring countries. As he tells Network World: “Potentially every spacecraft launched from that time on will be interwoven from a communications point of view. But perhaps more important, when the spacecraft have finished their primary missions, if they are still functionally operable — they have power, computer, communications — they can become nodes in an interplanetary backbone.”

Ghost spacecraft reincarnated as an interplanetary Internet to support the next generation? Seems worthy of a little evangelizing.