Does Watson Know What It Wants to Learn Next?

Hey, it can win on Jeopardy, so let's put our lives in its hands 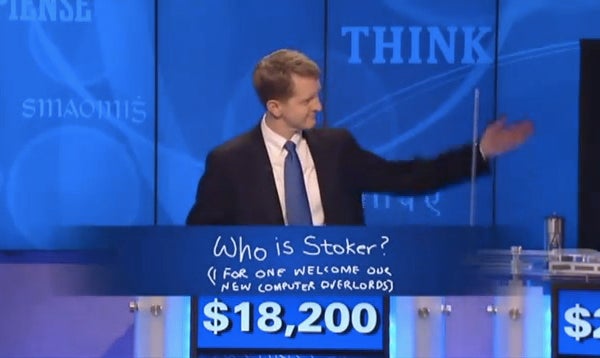 Last night, after Watson swept the floor with the human race, we asked Dr. David Ferrucci, head of the Watson team, about him. It. The brainmachine is really good at analyzing and assimilating data, so it seemed that, when it comes to feeding it data, who would know more about machine learning than Watson? Is Watson able to clearly identify what areas it wants to know more about?

“Absolutely!” In Ferrucci’s example, say Watson reads somewhere that “cytoplasm is a fluid that cushions the nucleus.” Sharp Watson takes this information with a grain of salt, since it is uncorroborated. Later, Watson is told authoritatively that “cytoplasm is a liquid that surrounds the nucleus.” At this point, Watson has burning questions to investigate, Ferrucci explains. “Is a liquid a fluid? Does surrounding mean cushioning?”

Awesome. Spoon-feeding information to a giant brain is not really a scaleable process, so I’m glad to know that the machine is using its skills to teach itself about the world, rather than being dependent on fallible meatbrains for deciding what it should learn next.

Meanwhile, having won on Jeopardy, Watson is getting a job in a hospital.

After the airing of the latest triumph (and crowning as a “new computer overlord” by trivia-master Ken Jennings [read his side of the story at Slate]), IBM announced Watson’s next project: a foray into healthcare. IBM will be working with Nuance Communications, a company that works on speech recognition for medical diagnoses, as well as physicians at both Columbia University and the University of Maryland. They’ll be working on using Watson’s analytics in a way that’ll help doctors make faster and smarter diagnoses–Watson is able to quickly scan mountains of information, from journals to prior cases and all kinds of other medical literature, finding relevant facts much faster than humans could. A one-word indicator in a patient’s description of a symptom could trigger Watson to find applicable data, which he can do instantly, which a doctor could miss.

IBM and Nuance have a multi-year research project in the works, but expect to have some sort of commercial project ready within 18-24 months.