Video: Chandra Captures the First Direct Evidence of Superfluids at the Heart of Neutron Stars

The cores of neutron stars are the densest observable known matter in the universe, so dense that a single teaspoon... 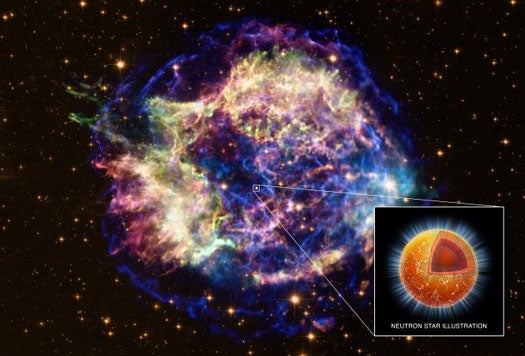 The cores of neutron stars are the densest observable known matter in the universe, so dense that a single teaspoon of neutron star core would weigh some six billion tons. That density makes them fascinating to those seeking to probe the properties of matter, and NASA’s Chandra X-Ray Observatory has made an interesting discovery doing exactly that, finding the first direct evidence that matter there can take on a superfluid state.

Superfluids are strange states of matter, typically forming at very low and very high temperatures, exhibiting gonzo properties like a seemingly gravity-defying tendency to climb up the walls of containers and friction-free superconductivity. That is, they are perfect conductors that don’t lose energy during transmission. And the fact that they appear to exist at the center of neutron stars tells scientists a lot about nuclear interactions in high-density matter and the life-cycles of neutron stars.

The pressure within neutron stars is so intense that in the stars’ cores, charged particles merge, resulting in a star mostly consisting of neutrons (hence the name). This pressure also gives off a great deal of heat. But in looking at supernova remnant Cassiopeia A, about 11,000 light years away, Chandra noticed an ultra-dense neutron star that was bleeding temperature at a rate of about four percent per decade, a rapid and anomalous decline.

The explanation, two independent teams of researchers have concluded, is that protons at the star’s core have taken on a superfluid state, causing the star to cool more quickly than expected. Catching Cas A’s superfluid neutron star at this particular point in its life cycle should allow researchers to test models of how the strong nuclear force works in super-dense matter and study some of the stranger characteristics of neutron stars, like glitches in their rotations and odd occurrences in their magnetic fields.