Reducing cargo ships’ weight would be a major step in reducing the carbon emissions of the worldwide freight industry. Fraunhofer … Continued 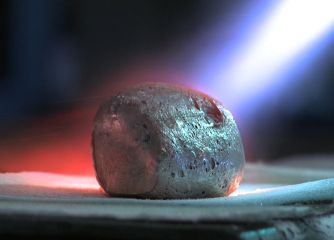 Reducing cargo ships’ weight would be a major step in reducing the carbon emissions of the worldwide freight industry. Fraunhofer Labs in Germany has one possible solution: ship hulls made from lightweight, stiff aluminum foam.

A new aluminum-titanium hydride powder developed at the Fraunhofer Institute for Machine Tools and Forming Technology in Chemnitz, Germany, foams when it is heated up, rising like a leavened loaf of bread. The powder, which is lighter than water, is first pressed into bars, then placed between two steel sheets and heated in an oven. Around 1,200 degrees F, the foam rises and bonds to the steel, according to a press release from YourIs.com, which promotes EU projects.

It’s a tough material, deforming under pressure but resisting breakage. This would allow ship hulls that can travel through the icy waters of northern Europe.

Conventional ice-going cargo ships can weigh between 850 and 1,000 tons, and can carry about 3,000 tons of payload. A European Union project aims to cut the ships’ own weight in half while maintaining that payload capability. Fraunhofer Labs has been working on plastic composites and metal foams to replace parts of a ship, especially those above water, and new methods that could be used to build a whole new type of ship. The aluminum-titanium hydride foam would fall into the latter category.

It can cut ships’ weight by 30 percent, YourIs reports. Reducing ship weight could remove the equivalent CO2 emissions of 55 to 60 trucks, according to Fraunhofer.

Veikko Hintsanen, a captain from Finland, helped the German researchers design a super-light ship, powered by liquid natural gas, which they nicknamed “Bioship 1.”