To Silence Protesters, Egypt Unplugs Itself From the Internet Entirely

Add “shutting down the Internet” to batons and tear gas as the protest-silencing methods of the modern era. In response... 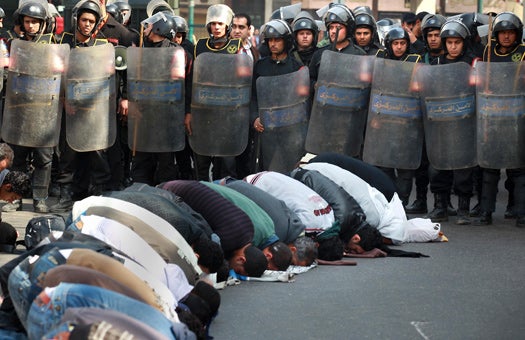 Add “shutting down the Internet” to batons and tear gas as the protest-silencing methods of the modern era. In response to protests simmering throughout Egypt this week, with calls for the president to resign and outcries over the jailing of political dissidents, the government shut off the Internet Friday.

“According to our analysis, 88 percent of the ‘Egyptian Internet’ has fallen off the Internet,'” said Andree Toonk at BGPmon, a monitoring site that checks connectivity of countries and networks, to the Guardian.

The Internet went dead around midnight Egypt time on Friday, and at the same time, the few companies that pipe Internet connections into and out of Egypt went dark as well, the AP said. The government apparently wields enough control over the country’s Internet service providers that it shut them all down at once, something that is unprecedented in the history of the Internet, according to network security expert Jim Cowie.

This is a departure from other regimes’ attempts to quash online communication — typically, a few websites are blocked, not the entire pipeline. That was the case earlier this week, as Egyptian ISPs restricted access to social media sites like Facebook and Twitter. But today, the shutdown reaches far beyond the protesters to Egypt’s entire economy. Cowie’s Internet-monitoring firm, Renesys, said “every Egyptian provider, every business, bank, internet cafe, website, school, embassy and government office that relied on the big four Egyptian ISPs for their internet connectivity is now cut off from the rest of the world. Link Egypt, Vodafone/Raya, Telecom Egypt, Etisalat Misr, and all their customers and partners are, for the moment, off the air.”

The Egyptian Stock Market is still online, however, because the ISP that powers it, Noor Group, was left alone.

In this country, discussions about shutting off the Internet have centered on attacks from other nations. Sen. Joe Lieberman wants to give the president an Internet “kill switch” that would disconnect America from incoming worldwide traffic. But it probably wouldn’t work anyway, because hackers would use proxy servers and other workarounds to circumvent any blockade.

That may be why Egypt shut off the whole thing, security experts said — there is no possibility for a proxy, because there is nothing coming in or out.

“There is literally no route. It’s as if the entire country disappeared,” Cowie said.

A wholesale shutoff, rather than some blocked tweets, may be more likely to spark interest from other governments. “We are concerned that communication services, including the Internet, social media and even this tweet, are being blocked in Egypt,” State Department spokesman P. J. Crowley said on Twitter.

The Internet and social media were key instruments of communication during the 2009-2010 election protests in Iran, dubbed the “Twitter Revolution” for the site’s importance in allowing protesters to communicate with each other. Now it appears Egypt wants to prevent communication altogether.