Video: MIT Media Lab Prints Out a Sweet-Sounding Flute with a 3-D Printer

As far as things that come out of the MIT Media Lab are concerned, perhaps a flute is among the... 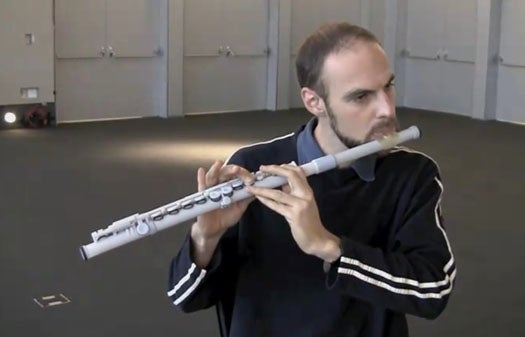 As far as things that come out of the MIT Media Lab are concerned, perhaps a flute is among the less impressive. But take into account that the entire fully-functioning acoustic instrument was created via 3-D printer with a minimum of human assembly, and it sounds markedly more impressive.

The flute was created on an Objet Connex500 rapid prototyper, a 3-D printer that can print in multiple materials at the same time. The flute was constructed from a few different materials – a rigid material for the body, a softer one for the mouthpiece, another for sealing the air in at the proper places – during a print run of about 15 hours, during which time the materials were added on one thin layer at a time.

The finished product was in four pieces, which simply had to be rinsed of supporting materials and assembled by hand (the springs were the only element added after printing). It’s not a perfect flute just yet – as you’ll see in the video below, there is still some fine tuning to be done – but it does produce good acoustic sounds. Moreover, it heralds just how far 3-D printing technology has come over the last couple of decades.