Hubble Peers 13.2 Billion Years Back in Time to Capture the Most Distant Galaxy Ever Seen 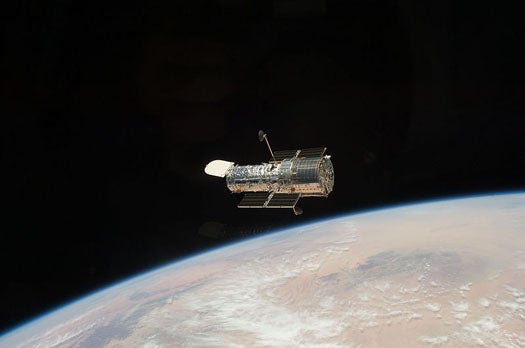 While the astronomical community anxiously awaits the launch of the James Webb Space Telescope, the Hubble Space Telescope keeps reminding us just how remarkable of an instrument it really is. Astronomers studying ultra-deep imagery from Hubble have located what could be the most distant galaxy ever glimpsed some 13.2 billion light years away—so far away that the galaxy appears as it did when the universe was just 480 million years old.

During this 170 million year period—a short time on the cosmic scale—the rate of star birth increased by ten times. Galaxies were populating and forming the basis of the universe we know today, fed by the gravitational influence of dark matter (we think) during these formative years.

This early galaxy appears as just a smear of starlight in the Hubble images and is more than 100 times smaller than the Milky Way. Calculations show that it’s redshift value—the extent to which space has stretched its light into larger wavelengths—is around 10.3, though precisely measuring redshifts this high is outside of Hubble’s capabilities (though after months of calculating and recalculating, astronomers are confident they are correct).

When Webb launches later this decade (it’s slated for launch in 2014), it will be the first space telescope that can accurately measure redshift values above 10, meaning not only will it be able to confirm Hubble’s new findings, but it should be able to find other young galaxies, even those very first ones that were thought to have formed 200 to 300 million years after the Big Bang.