Learning a new language is hard. All those new grammatical rules, the new spellings, new tenses, irregular verbs–it’s a serious... 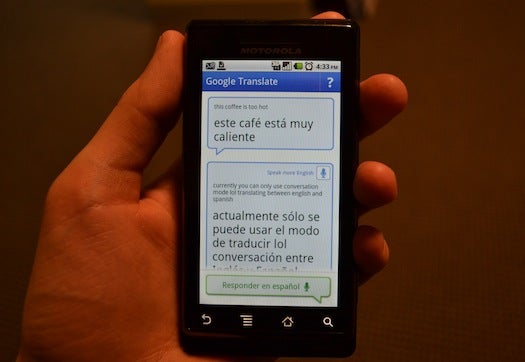 Learning a new language is hard. All those new grammatical rules, the new spellings, new tenses, irregular verbs–it’s a serious pain. Luckily, Google Translate just issued an update to enable what Google’s calling “Conversation Mode.” Basically, it translates a multi-language conversation in real-time, spitting out a translation just as soon as you finish speaking. Now you can quit those painful language classes!

Translate, available in the Android Market for all Android phones with at least version 2.1 (read: almost every Android phone), now packs conversation mode. It’s meant to simulate the duties of a translator: After each person is finished talking, the app translates and regurgitates the translation on the fly. It only works with English and Spanish at the moment, though as Translate supports 53 different languages (!), if Conversation Mode is a success, Google will probably bring it to more languages.

In my quick tests, Translate worked exceedingly well half the time–Google’s skill with English voice commands is pretty much unparalleled, so it’s no surprise that Translate can interpret English and spit it out as Spanish fairly easily. The other side, Spanish to English, gave the app more problems, though I’m not sure if it’s the app’s fault or my fault for reading Spanish news articles in what I’m sure is an offensively awful accent. Either way, it got a lot of my Spanish wrong, though if you’re careful to ignore the nonsense words that litter the translation (“Bluetooth” and “cowboy” popped up repeatedly for some reason), you can get the basic gist of what’s being said.

This isn’t the first app to attempt this kind of on-the-fly translation; in fact, the U.S. military is testing a similar app, and Google’s own Goggles app can do something similar with text. But it’s one of the more intuitive ways to translate real-world conversation we’ve seen, and it’s freely available to millions. Just search for “Google Translate” in the Android Market.