Is China’s ‘Secret’ Stealth Jet Already Taking to the Sky?

Last week, pictures emerged allegedly depicting China’s new J-20 stealth aircraft undergoing taxiing tests at a test airfield near Chengdu. This week, a fresh photo of dubious authenticity shows China’s new stealth plane taking flight (maybe). So has China successfully taken its stealth technology to the skies, and if so what does that mean for the U.S. and the balance of defense tech in the Pacific.

The answers are: “perhaps,” and “not a whole lot.” We first saw the photo above on Wired’s Danger Room blog who accessed them via FlightGlobal, and neither of these knowledgeable sources or their knowledgeable sources seems able to substantiate what the photos seem to claim: that China’s J-20 is airborne. But even if the photo isn’t real, China has openly acknowledged that the maiden flight of the J-20 is coming any day now. A test flight was scrubbed due to bad weather just last week.

As for the J-20’s impact, we’re looking at an operational delivery date at the end of the decade for China’s probable “fifth-gen” fighter/bomber (more on its function in a moment), so a test flight should have no outward impact on relations or the way the United States or other nations deals with the People’s Republic. Surely Chinese officials have an idea what they want the J-20 to mature into, but right now it’s unclear if the place pictured above is a true prototype or a proof of technology vehicle.

Further, it’s currently unclear what role the J-20’s would play in the People’s Liberation Army Air Force. It’s 70-foot body (that’s big for a fighter jet) has led some to speculate that the J-20 will be a bomber more so than a fighter, with the ability to carry a lot of fuel for long range missions and larger weapons bays for heavy-duty munitions. Others speculate that the J-20 could be a new breed of larger fighter designed not for dogfighting with enemy fighters but for targeting the support planes (like AWACS) that coordinate aerial warfare.

Whatever the J-20 is going to be, right now it’s nothing but a test-bed for China’s stealth technology, and until China tells us more about it there’s not a lot of point in worrying about it. Besides, the Pentagon has its own jets to worry about. The debate over how many F-22 Raptors (the closest U.S. analog to the J-20) the DoD ultimately buys never seems to end and the F-35, America’s next-gen fighter jet, is living up to military tradition by blowing through budget ceilings, failing parts tests, and falling woefully behind schedule. 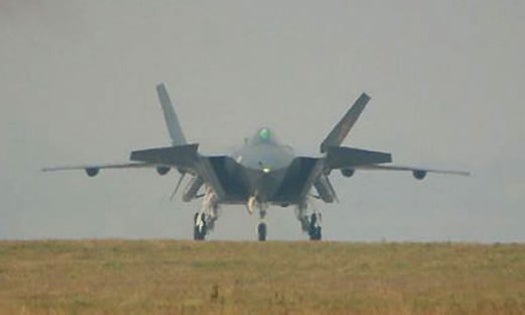