Voyager 1 Arrives at the Outward Reaches of the Solar Wind, Prepares To Enter Interstellar Space

It is the furthest-flung manmade object ever 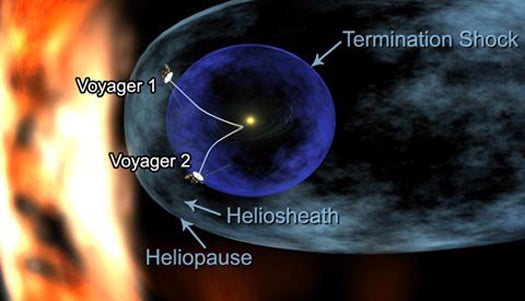 NASA’s Voyager 1 spacecraft, now in its 33rd year on the job, has reached the very edge of our solar system and is nearing the cusp of interstellar space. How does NASA know? The wind has died down. Voyager 1 has reached a point in the heliosheath that envelopes our solar system in which the speed of the solar wind that has been at Voyager’s back for three decades has dropped to zero.

That point is some 10.8 billion miles from the sun, beyond the outer planets and somewhat near the boundary between the solar system and interstellar space. That boundary is defined by the heliosphere, which reaches outward from the sun as far as the charged particles given off by our anchoring star can reach.

Those charged particles hurtle outward at supersonic speeds until they cross what is known as the termination shock. From there, they begin to slow and heat up significantly in a buffer region known as the heliosheath. Eventually, when traveling outward, they reach a point where the net outward speed of the solar wind drops to zero, and like the eye of a storm the chaos of the cosmos is calm for a bit (the wind is more likely turned sideways due to pressure from the interstellar wind that exists in the regions between stars).

That’s where Voyager 1 is now. In fact, it’s been there for a while. NASA handlers knew Voyager 1 crossed the termination shock back in late 2004 when the solar wind at its back began to slow. In June of this year Voyager recorded a net outward wind speed of zero, but the researchers wanted to conduct a few more measurements to make sure Voyager wasn’t simply in an eddy of some kind. Since June, the net outward solar wind speed has remained at zero.

That places Voyager 1 fairly deep in the heliosphere and about four years from emerging from the other side into interstellar space, where it will remain the furthest-reaching mission ever launched from Earth. That’s pretty impressive when you think about it: a piece of equipment conceived in the Apollo era when the moon seemed a distant target – Voyager 1 launched in 1977 mind you – is now poised to become the first man-made object to leave the solar system for the larger galaxy beyond.