Video: Professor Surgically Installs Camera In Head, Starts Tracking the World Behind Him

The New York University professor who planned to implant a camera in his head has finally done it. About a... 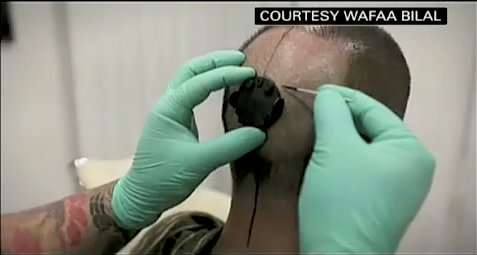 Wafaa Bilal gets a titanium implant that will attach a surveillance camera to the back of his head. via YouTube
SHARE

The New York University professor who planned to implant a camera in his head has finally done it.

About a week ago, Wafaa Bilal had a tattoo artist implant a titanium disc on the back of his head, so he can magnetically attach a small surveillance camera. He even set the whole procedure to music — check out this clip from CNN.

Once the soreness subsides, Bilal will wear his camera for a year as it snaps photos at one-minute intervals. The images will be beamed live to the Mathaf: Arab Museum of Modern Art in Qatar as part of a project called “The 3rd I.”

He acknowledges he’ll get a lot of mundane shots — in the clip, you can see his shower curtain and a bottle of what looks to be olive oil — but that’s part of the point, to comment on the “inaccessibility of time and the inability to capture memory and experience.”

Bilal, an Iraqi who fled his country under Saddam Hussein, is known for provocative art installations — earlier this year, he received 105,000 tattoos to commemorate those killed in the Iraq war, for instance. During the project, called “And Counting,” the names of Iraqi cities were tattooed on his back, along with 5,000 red dots to represent the American military personnel killed in Iraq and 100,000 dots in invisible ink, representing the official death toll for Iraqis. The whole procedure was streamed live.

To protect his students’ privacy, Bilal will attach a lens cap to the camera when he’s on the NYU campus. But nothing else is off limits — he will wear it to bed, for instance, and it’s waterproof, so it even goes in the shower. Find out more on his website.