Researchers have long suspected Saturn’s moon Titan might be hiding a volcanic surface beneath its dense atmosphere, and a new... 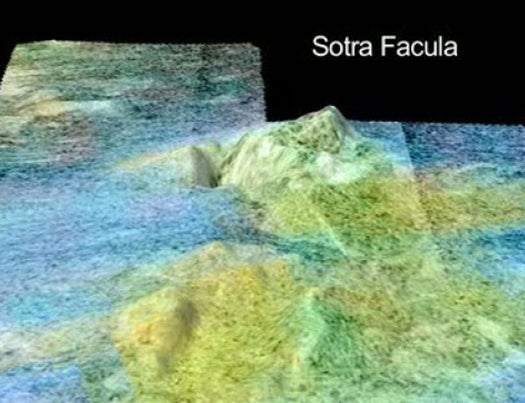 Researchers have long suspected Saturn’s moon Titan might be hiding a volcanic surface beneath its dense atmosphere, and a new discovery by NASA’s Cassini spacecraft has given them reason to believe they are right. Dubbed Sotra Facula, the feature captured by Cassini’s imaging instruments could be the largest in a string of ice and methane-belching volcanoes that may or may not still be active.

The jury is still out on whether Sotra is actually a volcano – and there are plenty of skeptics who believe it is not – but it is certainly the best evidence yet that Titan is volcanically active. The feature itself is more than 3,000 feet tall and stands beside a pit more than 5,000 feet deep. Cosmetically, it has the telltale appearance of a volcano on earth: a tall mountain with a cratered peak surrounded by dune-like structures that appear to be flows.

These flows wouldn’t be a result of the molten rock matter found on Earth, but molten ices from deep beneath Titan’s surface. Titan is a cold place (about –300 degrees) with a surface layer of ice. Though it’s still unproven at this point, theoretically any kind of internal heat produced by pressures within the planet could create molten ice that is closer to its melting point than surrounding ices. This molten ice would force it’s way upward and, ostensibly, erupt from a volcano like Sotra.

Such eruptions would go a long way toward explaining the abundance of methane gas in Titan’s atmosphere that, although it is routinely stripped from Titan by the sun, seems to also be constantly replenishing itself. But not everyone is sold – many previously discovered candidate planets were later ruled out. Some think Sotra could be more of the same.

Titan is about the size of Mercury but has an atmosphere about twice as thick as Earth’s, making it pretty difficult to see what’s going on underneath on the surface. So figuring out definitively whether or not Sotra is active – or if indeed it is a volcano at all – might take awhile. But there’s certainly a possibility that beneath all that methane there’s a volcanically active and dynamic surface.