A new fuel-free propulsion system for nanodevices works like a disappearing act, dissolving an object at one end and re-generating... 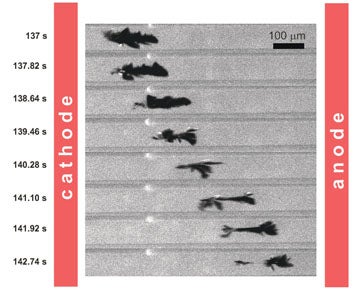 A new fuel-free propulsion system for nanodevices works like a disappearing act, dissolving an object at one end and re-generating it at the other end.

The method requires an electrical current to work, so it’s not completely energy-free, but it could be an effective way to propel nanoscale materials inside nano- or micro-devices. It could even lead to disappearing magical motors that vanish once their task is complete.

The process is based on bipolar electrochemistry, according to researchers in France. In an electric field, one end of a metallic object grows while the other end dissolves. This self-regeneration essentially allows an object to move at the excruciatingly slow speeds of 100 micrometers per second.

It’s difficult to make nanoscale chemical reactions that are powerful enough to move something in a specific direction. Scientists are studying several possibilities, including “fuel molecules” that decompose to move an object forward. Bipolar electrochemistry is a new method that could be simpler and easier to control. It involves exposing a metal material to an electrical field so that it has a positive charge at one end and a negative charge at the other. According to CNRS, the French National Center for Scientific Research, this enables chemical reactions to occur on both ends of an object — one end is oxidized and dissolves, and deposited at the other end. A paper describing the method appears in the Journal of the American Chemical Society.

The main advantage is that it requires no conventional fuel, but researchers say its adaptability is an added bonus. You could control an object’s speed by varying the energy potential between the electrodes, and you could even make micromotors that push objects in a predetermined direction and then vanish.

The approach could provide propulsion for nanodevices used in medicine and other applications, according to CNRS.