Most of the robots currently serving in the U.S. military are simply mechanized extensions of soldiers; They can execute dangerous... 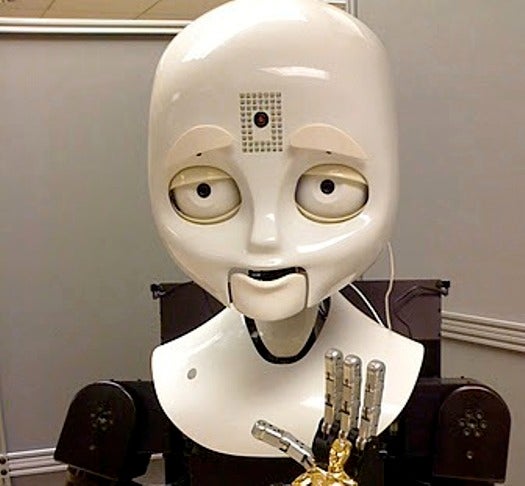 Most of the robots currently serving in the U.S. military are simply mechanized extensions of soldiers; They can execute dangerous maneuvers and keep people from high-risk situations, but they’re usually tethered to operators working remotely, and don’t cut down on manpower so much as they take it out of harm’s way.

But a machine named Octavia, which can respond to visual and verbal commands could pave the way for a fleet of self-sufficient bots that can be as receptive to a commander as a human soldier.

Octavia was displayed at a sci-tech conference in Virginia this week.

At less than two years old, the Navy’s Octavia can make conversation, expressing confusion when she doesn’t understand a command with her Casper-like cherubic white face. She can move about on her Segway base, and dozens of motors in her joints allow her to perform complex tasks dextrously, like removing a wounded soldier from the battlefield or beating a human at rock, paper, scissors.

Cameras in her eyes, multiple audio-input channels and an infrared sensor implanted in her forehead allow her to not only register commands, but create profiles of people she encounters, filing data on their speech patterns and expressions. A robot that can gauge expressions of urgency or the meaning of commands garbled by speech errors will be more useful in a high-stress situation than one that requires preemptive programming.

Octavia’s size and design will likely prohibit her from active duty, but the Navy’s focus is on developing her sophisticated interaction with human commands for her more rugged cousins.

The Navy just issued four contracts to further advance software like Octavia’s in robots better suited for service. Developers are now working on streamlining the conversion of verbal and gesture commands into vehicle waypoints and increasing robots’ emotional literacy to sense stress or distraction in their commanders.