E-Paper Breakthrough Could Lead to Rollable, Flexible, Even Disposable e-Readers

The problem with most e-paper, as we’ve come to know it, is that it’s not actually anything like paper. Most... 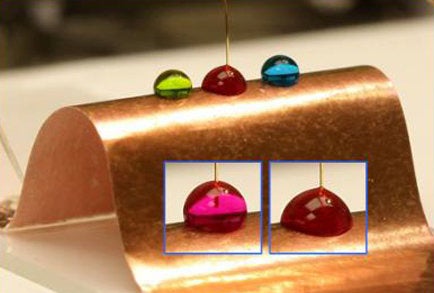 The problem with most e-paper, as we’ve come to know it, is that it’s not actually anything like paper. Most e-readers like the Amazon Kindle use a glass substrate embedded with complex circuitry to achieve the visual appearance of paper rather than the glow of a computer screen. But a new kind of e-paper under development at the University of Cincinnati could change all that by putting e-ink where it belongs: on e-paper that’s actually made out of paper. The breakthrough could finally lead to rollable, flexible, low-cost, and even disposable e-readers.

The e-paper works by using paper, rather than glass or some other rigid substrate, as the host material for an electrowetting device. Electrowetting is a process that employs an electric field to manipulate colored droplets within a display in order to arrange them in a way that reveals content. That content can range from black and white type to, theoretically, high-res color video. The researchers found that the performance of their paper-based elecrowetting device is equivalent to that of glass, which currently sets the bar for performance in the portable e-reader field.

Professor Andrew Steckl and his team envision a device that feels like paper, is rollable like paper, and – like paper – is cheap enough to be disposable. The whole notion is very cool, with myriad applications from next-gen e-readers to advertising.

It’s not exactly clear why at this point in time researchers are endeavoring to create really cool electronics that we would throw away after using, but we’re all about the low cost aspect. And there will be plenty of time to think about whether we really need disposable e-readers during the three-to-five years it will likely take to get this technology from lab bench to market, hopefully as a rollable – and reusable – alternative to tablet-style reading devices.