A Harvard astronomer and his team have turned up something quite big while running publicly available data from NASA’s Fermi... 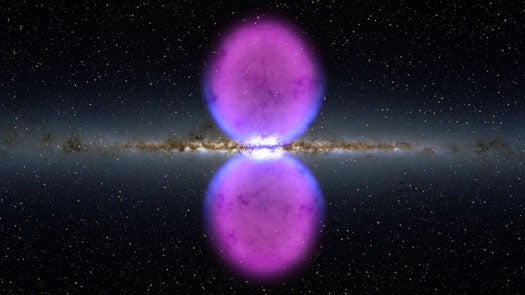 A Harvard astronomer and his team have turned up something quite big while running publicly available data from NASA’s Fermi Gamma-ray Space Telescope, and by big we mean both in scientific magnitude and in astronomical size: two massive gamma-ray emitting bubbles extending 25,000 light-years both north and south of the Milky Way’s center. The researchers aren’t sure where they come from or why they’re there, but the discovery of this massive new structure in the heart of our own galaxy is being equated to discovering a new continent on Earth.

Viewed from Earth the structure spans half the sky, but previous examinations of the data – which came from Fermi’s Large Area Telescope (LAT) – didn’t reveal the structure because it couldn’t bee distinguished from diffuse emission, a fog of gamma rays that appears across the entire sky.

Researchers are constantly looking for new formulas that help them subtract diffuse emission, and the team from the Harvard-Smithsonian Center for Astrophysics hit pay dirt. When they removed the gamma-ray fog from their data, the two massive bubbles were left behind. Upon comparing their new findings to other older spacecraft data, they realized that hints of the bubbles’ existence were there all along.

The finding asks more questions than it answers – in fact, no one knew there was even a question until the team uncovered the massive structure. The source of the bubbles is mysterious, though it might have something to do with the supermassive black hole at the center of the galaxy. Other black holes have been seen emitting gamma ray jets from their centers, and while the Milky Way’s core doesn’t show evidence of a particle jet, there may have been one in the past that created the bubbles.

They could also be the result of huge bursts of gas resulting from the explosions of stellar formation that created the star clusters close to the galaxy’s center millions of years ago. The gamma-ray bubbles could be millions of years old as well. Whatever they are, they’re a reminder that no matter how much we think we know about the universe, there’s plenty to learn right here in our own galactic neighborhood.