Spanish robotics engineers have devised a new weapon in the battle against zombie-sats and space junk: an automated robotics system... 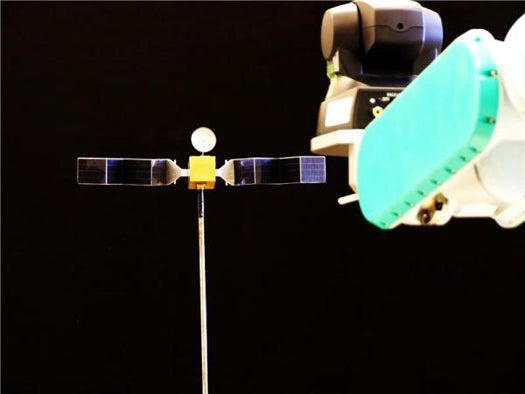 Spanish robotics engineers have devised a new weapon in the battle against zombie-sats and space junk: an automated robotics system that employs computer vision technology and algorithmic wizardry to allow unmanned space vehicles to autonomously chase down, capture, and even repair satellites in orbit.

Scientists at the Universidad Carlos III de Madrid (UC3M) created the system to allow for the removal of rogue satellites from low earth orbit or the maintenance of satellites that are nearing the ends of their lives, prolonging their service (and extending the value of large investments in satellite tech). Through a complex set of algorithms, space vehicles known as “chasers” could be placed into orbit with the mission of policing LEO, chasing down satellites that are damaged or have gone “zombie” and dealing with them appropriately.

The chasers rely on computer vision algorithms that can recognize satellite model vertices to understand the shape of a spacecraft in orbit. A second vision algorithm associates visual input about the texture of certain points of interest on the satellite with points on the computer model. By associating the actual satellite to the model that the chaser is already programmed to understand, it can autonomously devise the best approach to docking with and performing maintenance on the subject.

Ostensibly, such robotic chasers could not only repair damaged satellites but could also re-up their supply of propellant, a lack of which is one of the primary reasons perfectly good satellites end up defunct. And of course using a robotic system to perform maintenance or remove a busted satellite from orbit saves the expense – and the risk – of sending a manned mission to do it.