Building a satellite and launching it into space was once a multi-million dollar proposition. But even though miniaturization and easy-to-adapt... 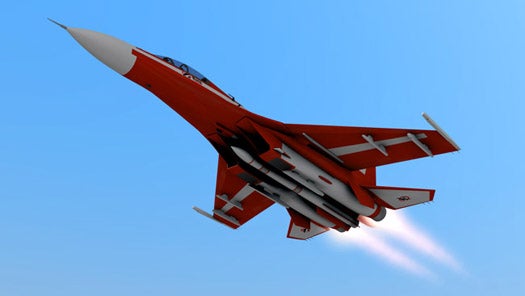 Building a satellite and launching it into space was once a multi-million dollar proposition. But even though miniaturization and easy-to-adapt technology formats like the CubeSat have brought down the costs of building satellites, the cost of getting those satellites into space is still sky high. So while new commercial space carriers perfect their various heavy lift rockets, one emerging space company aims to send smaller payloads into space on the backs – or rather the bellies – of existing vehicles: decommissioned military jets.

NanoLauncher, an upstart satellite launching company backed by one American company and three Japanese firms, plans to take a more Virginal approach to reaching the edge of space. Decommissioned military jets will carry small satellites (those weighing less than 330 pounds) and smaller so-called nanosatellites (those weighing less than 22 pounds) several miles up into the atmosphere aboard a rocket mounted on the jet’s belly. When the plane can safely climb no hire, it will fire the rocket, which will carry the payload the rest of the way into its orbit.

The service will be divided into two divisions: NanoLauncher Blue will carry payloads to suborbital altitudes, while NanoLauncher Black will send them even higher, up to 155 miles high where they can fall into orbit. NanoLauncher Black currently has a maximum payload of 44 pounds. The company is considering Lockheed’s F-104 Starfighter and the MD F-15D Eagle as possible launch vehicles, and will work from existing facilities like NASA’s Kennedy Space Center and Wallops Flight Facility, or perhaps Vandenberg Air Force Base.

The idea is to make space launches affordable to commercial and academic ventures that can’t afford the high costs associated with piggybacking on a NASA mission or launching a single-use rocket. With small satellites constructed by universities or other institutions expected to increase dramatically over the next decade, the need exists for a service that can get them into space for less than $10,000 (the average cost associated with building and launching a CubeSat has ranged from $50,000 to $150,000 in the past).

Getting to that point means NASA can focus on NASA priorities while academia and private enterprise can find a reasonable means for ferrying scientific instruments and the like into orbits for less. That means more and better science at a lower cost, which in turn is good for everyone involved, even the space carriers doing all that heavy – and sometimes light – lifting. NanoLauncher Blue hopes to be launching suborbital satellites by 2014, with NanoLauncher Black following suit the following year.