No ailerons, no control surfaces, just directed jets of air 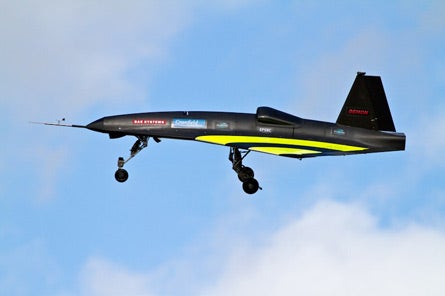 This represents the first alternative to the moving flap technology used since the early days of aviation, in which moving mechanical elevators and ailerons control the aircraft’s flight. Conventional control surfaces’ many moving parts require frequent, costly repairs and account for a significant percentage of an aircraft’s noise output.

The Demon UAV, BAE Systems’ flapless aircraft, is shaped in a “blended wing body” configuration, which allows it to mimic the aerodynamic forces normally provided by flaps, elevators and ailerons by blowing jets of air from a nozzle over Coanda surfaces installed across the wing.

The flapless system, based on a concept called fluidic flight control, would require less maintenance and would produce less noise, affording the aircraft a more stealthy profile for military missions. It could also allow for planes with significantly reduced wing size.