Twitter Gets a New Look, A More App-Like Interface

In a press event yesterday that required far more than its characteristic 140 characters, Twitter’s top brass – co-founder Biz Stone, CEO Evan Williams, and two of the top product development team – unveiled the new and improved Twitter. And in what looks on its face to be an attempt to lure people away from those flashy, customizable Twitter apps and back to Twitter’s Web page, the Tweeps behind Twitter have come up with some pretty cool features.

What’s really nice about the new Twitter is the way it puts a lot more information about a tweet in front of you navigating away from your Twitter stream. A two-pane interface keeps your stream on the left and fills the right pane with information about individual tweets as you select them. Click on a tweet in your stream, and the right pane populates with that user’s last few tweets, anyone mentioned within the post, people who have re-tweeted it, etc.

Also cool: the way the new interface lets you access media within individual tweets. If someone embeds a pic or a video within a tweet, rather than just linking out to that content on another page, it shows the full-size photo or video player in the right pane, letting you get right to the content and then back to cruising your stream without ever leaving Twitter. Even cooler: you can share an entire Flickr gallery via a tweet, which populates the right pane with thumbnails for the collection. You can even launch a Flickr slideshow in the right pane, again without leaving your stream.

Those are the highlights, which are punctuated by other little improvements, like a new set of hot keys (including one to refresh your stream), the display of people’s real names next to their Twitter handles, and a slimmer, less dominating “What’s Happening?” box – the one where you actually pen your tweets – letting the stream of content take center stage (according to TechCrunch‘s live blog of the announcement, this was to play up the idea that you don’t actually have to contribute to the Twitter dialogue to take advantage of it as a media exploration tool). 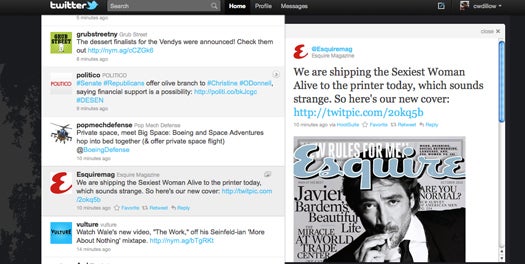 You don’t have to take our word for it. The new, sleeker Twitter is live here.