A pair of Russian aerospace companies have announced plans to launch the first commercial space station, in 2015 or perhaps... 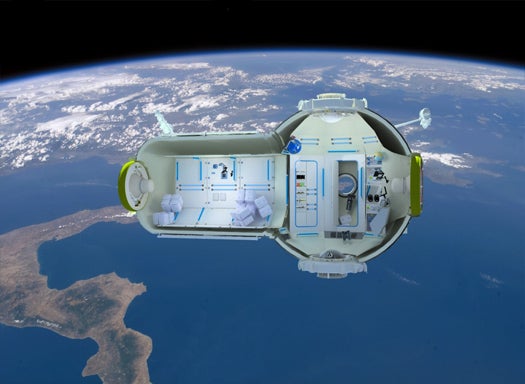 A pair of Russian aerospace companies have announced plans to launch the first commercial space station, in 2015 or perhaps 2016. The station will have room for up to seven astronauts, scientists, and wealthy citizens to perform experiments or just take in the scenery. Meanwhile, U.S. company Bigelow Aerospace is also aiming to launch a private space station, possibly as soon as 2015 — the race is on.

Orbital Technologies and RSC Energia, the Russian companies behind the plans, are outfitting the station with a universal docking system that would be compatible with American, Russian, European and Chinese spacecraft. Soyuz and Progress spacecraft, both produced by RSC Energia, will travel to and from the station, providing it with crewmembers and supplies. The station is projected to have an working life of around 15 years, and an astronomical development cost.

The commercial space station is named the Commercial Space Station (CSS). It will be positioned in orbit about 60 miles from the ISS, to allow for easy transfers and neighborly visits.