Nano-Wiretap Device Can Probe and Monitor Cells in Real Time

A new nano-scale wiretap device could tell researchers about the inner workings of cells, according to a new Harvard study.... 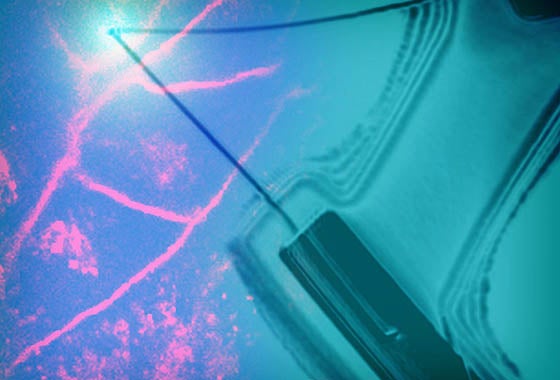 A new nano-scale wiretap device could tell researchers about the inner workings of cells, according to a new Harvard study.

It involves a transistor that can take electrical readings, embedded inside a membrane that fits inconspicuously inside an individual living cell. The tiny probe, which is smaller than many viruses, is the first semiconductor device to take measurements of the inside of a cell.

The nano-probe infiltrated living cells without damaging them, which is a drastic improvement over current cell-tapping technology, according to Harvard chemistry professor Charles Lieber, who led the research team.

NanoFETs — nano-scale field-effect transistors — could allow scientists to “interrogate” cells, in the authors’ words, to understand electrical impulses that cause neurons fire or heart cells to beat.

Existing transistor probes can only do this from the exterior of cells, like metal detectors hovering over the ground, as Nature News reports. Transistors need two electrical contacts to measure voltage differences, and inserting two large contacts into a cell can damage it. Instead, the new device uses a nanowire shaped into hairpin. The bent tip penetrates the cell, and the two arms hang out the side, where they serve as the transistor’s electrical contacts.

This breakthrough comes with an added bonus — a new nanowire fabrication process that makes it easier to control the way nanowires are grown. Lieber and his team figured out that if they stopped growing nanowires at a certain stage, they could produce the kink required to bend the wire 120 degrees, Nature News reports.

The new device is also easier to insert than other electrical monitoring devices, because the researchers tricked the cell into absorbing it. When they coated the device with a double layer of lipids — the same material that cell membranes are made of — the cell absorbed it, using the same process that allows cells to engulf viruses and bacteria, according to a Harvard news release.

The devices could be used to measure ion flux and electrical signals in the nervous system, Lieber says. They could also be fitted with receptors that can check for protein expression and other biochemical changes, which would be useful for determining the efficacy of new drugs, especially for heart disease.

The device was described this week in the journal Science.