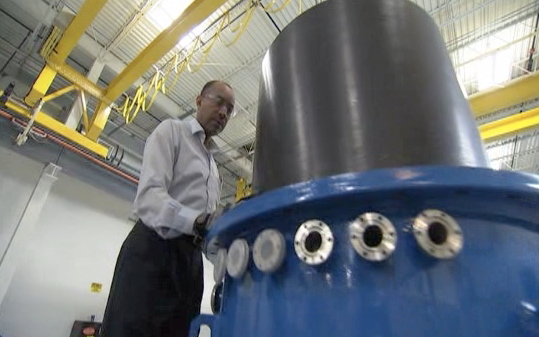 The federal government is investing in a one-of-a-kind power-storage plant in New York that will use a network of flywheels to store energy.

Massachussetts-based Beacon Power says the plant will buffer 20 megawatts of power on the grid, according to CNET. That’s a big jump from previous installations, which have provided about a megawatt of power.

Flywheels store electricity as kinetic energy, and can dispense that energy back to the grid in quick bursts. They have potential as energy storage devices for renewable energy sources, which are variable and unpredictable. Solar and wind power in particular would be more promising if there was a way to capture and store their energy for later use.

Flywheels work by using electricity to accelerate a carbon-fiber rotor inside a vacuum. When the power grid needs a burst at peak demand times, that kinetic energy is released, and the flywheel slows down. When more energy is being generated, it can be sent to the flywheel, which will speed up.

In this way, flywheels can maintain the balance between supply and surging demand. Currently, utilities use natural gas power plants to maintain that balance.

As CNET explains, the flywheel plant at Stephentown, N.Y., will help the natural gas plants meet the grid’s power demands. When it is finished early next year, it will provide about 10 percent of frequency-regulation services in New York for a typical day.

The Department of Energy is contributing a $43 million loan guarantee, which will cover about 63 percent of the project’s costs, according to CNET.