The solar flare that slammed into Earth’s atmosphere earlier this month was a prescient reminder that solar weather — though... 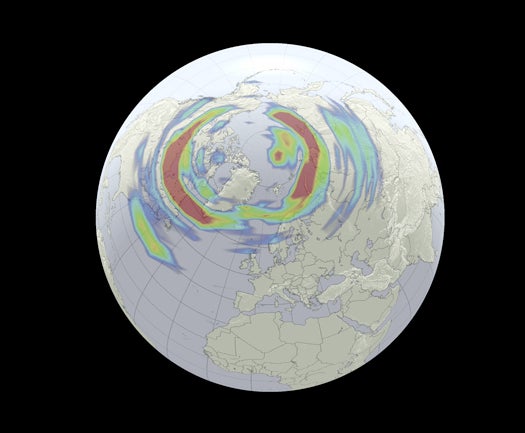 The solar flare that slammed into Earth’s atmosphere earlier this month was a prescient reminder that solar weather — though sometimes beautiful — can have serious impacts on the Earth. So perhaps the timing is right for something like AMPERE, the first space-based system capable of monitoring the Earth’s immediate space environment in real-time. The system is the first step in a process that will enable around-the-clock monitoring and eventual prediction of solar and space weather and its effects on Earth.

AMPERE — short for Active Magnetosphere and Planetary Electrodynamics Response Experiment — is a collaboration between Johns Hopkins University’s Applied Physics Laboratory (APL), Iridium Communications, and Boeing, funded by a $4 million grant from the National Science Foundation. It functions via Iridium’s vast constellation of commercial satellites (66 total), from which Boeing collects the atmospheric data for delivery to APL where it’s crunched in real-time into a map of the magnetic field around Earth.

Because Iridium’s constellation covers the entire globe, AMPERE can keep an eye on the planet form all angles at all times. That’s reassuring; severe solar activity could potentially knock out satellites, cripple electricity grids and electronic devices on the ground, and even down, and even put high-altitude aircraft in danger. Moreover, solar weather occurs in cycles, sort of like hurricane season here on Earth. As it happens, we just entered a particularly stormy part of that cycle, and the next 3-5 years will likely be tempestuous.

The next step for APL and company involves developing the tools to actually forecast geomagnetic storms in space before they hit Earth’s magnetic field. That development should begin before the end of this year. In the meantime, you can learn more about AMPERE via the video below.