A team of Italian engineers is gearing up for a high-tech road rally that should impress even the outside-the-box dreamers... 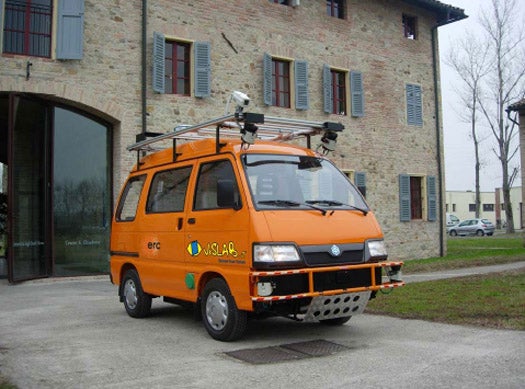 A team of Italian engineers is gearing up for a high-tech road rally that should impress even the outside-the-box dreamers over at DARPA: an 8,000-mile journey from Italy to China, with nobody behind the wheel. The three-month convoy will be the longest test of driverless vehicles ever conducted, taking the cars through twisting mountain passes, Moscow traffic, and harsh Siberian weather before ending up in the sprawling roadways of Shanghai in October.

Of course, when we say there’s nobody behind the wheel, that’s not entirely accurate. The project includes two electric-powered “driverless” vans, each of which will carry two technicians. One of them will always be in the driver seat ready to press the red “oh sh*t!” button and take control should the car’s laser scanners, cameras, and software get into a situation that might turn dangerous.

Each van will work in tandem with a manned leader van that will drive ahead and give its driverless counterpart cues on where it’s going next. But the driverless vehicle will be responsible for negotiating traffic and responding to the environment and obstacles around it. Only one driverless van and leader vehicle will operate at a time; the other pair will be hauled behind on a truck. The vans require an eight-hour charge after every few hours on the road, so even traveling at speeds between 30-37 miles per hour — not very fast but not a crawl either — the going will be very slow.

The transcontinental trek is more of a stress test for driverless technology than a demonstration, and the project leaders concede that the cars will likely need quite a bit of help from humans. But the 100 terabytes of information collected en route will go a long way toward helping the driverless technology maker, VisLab, improve its intelligent systems and artificial vision.

The idea is that someday 100 percent driverless technology could be used to freight cargo across continents autonomously or to reduce troop risk by running driverless military supply convoys, goals more or less congruent with those put forth by DARPA when it created the Urban Challenge several years ago. Of course, there’s one more immediate challenge facing the team: Where, exactly, does one charge up a next-gen electric vehicle in the middle of Siberia?