Graham Hawkes is known for crafting near-perfect undersea vehicles—sleek, winged subs that ferry eco-explorers to the greatest depths of the... 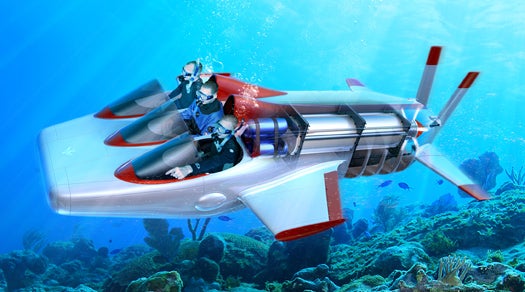 Graham Hawkes is known for crafting near-perfect undersea vehicles—sleek, winged subs that ferry eco-explorers to the greatest depths of the ocean. But when a brilliant billionaire shows up and asks for something even more sophisticated, it’s time to draw up a new plan.

Last summer, Richard Branson commissioned Hawkes to build a sub no heavier than 1,600 pounds, the weight limit on Branson’s 105-foot catamaran. But even Hawkes’s most svelte deep divers weigh at least 4,000 pounds. Trimming battery or engine weight, Hawkes realized, would hurt performance, but the thick hull required to safely contain compressed air contributes some 1,500 pounds of the bulk. That was weight that could go, Hawkes thought, so he began designing a new category of submersible: a submarine featuring open cockpits.

To dive in a roofless sub, Branson’s passengers will need to dress for the conditions. Outfitted in air-regulator masks that draw oxygen from an onboard supply, passengers can plunge to 130 feet and zip around coral reefs at a swift 4 knots for two hours. (Wetsuits are optional.) The stripped-down model weighs in at less than 1,500 pounds. “The idea was to be able to move through the water with the grace and agility of marine animals,” Hawkes explains. He dubbed his invention the Deep Flight Merlin and delivered the three-seater to Branson this spring. Now he’s gearing up to produce an entire line of Merlins with room for one to six passengers each. The wait time for a Merlin is four months, and they start at $700,000—the price you pay to become one of Branson’s aquatic peers. 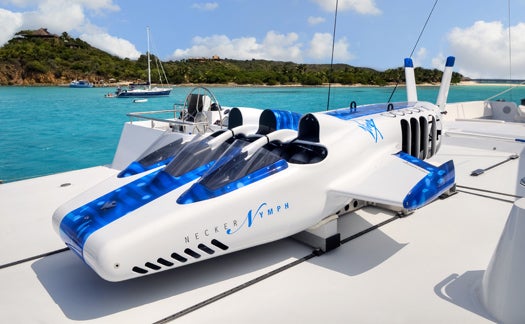 The finished sub, the Necker Nymph, on the deck of Branson’s yacht

Flight Controls: Like in a fighter jet, pilots control the sub’s depth, direction and speed with a joystick.
Open Cockpits: Individual shields deflect water over passengers’ heads as the vessel zips through the sea at up to 6 knots.
Power:A lithium-phosphate battery drives a propeller that sucks in water through side vents and pushes it outward, achieving 500 pounds of thrust.
Wings: The ailerons, elevators and rudders control roll, pitch and yaw, just like an aircraft, all through mechanical linkages.
Hull: The sub is encased in lightweight carbon fiber sturdy enough to withstand collisions with rocks and debris on the seafloor.