We're in China for the kickoff of what will be the largest World's Fair in history. Here's why

Remember World’s Fairs? Those dazzling displays of self-cleaning kitchens, rocket cars and robotic servants–the futures we’d all be living in around, well, now? Whose effervescence and ability to captivate seemed to have fizzled into nothingness long ago?

Well, they’re back–having never technically gone anywhere. Shanghai, the world’s foremost exploding City of the Future, is hosting the largest and most expensive World Expo ever presented. What visions of exactly what kind of future await? We’re here this week to find out.

Find all of our World Expo coverage here

The first World’s Fair was held in London in 1851–the center of the rapidly industrializing modern world. Under the banner of the “Great Exhibition of the Works of Industry of All Nations,” the first Expo (held before even the first transatlantic telegram was sent) was literally the only place one could go to learn anything about the latest technologies of industry and design pushing the world forward.

New York, in 1939, was where World Expos transitioned from the more practical, trade-showish gatherings of industrialists to the mind-boggling displays of a dreamy future shaped by technology. That fair’s famous Perisphere and Trylon and its central “World of Tomorrow” theme helped cast off the darkness of the Great Depression and push the minds of New Yorkers and the world toward the “dawn of a new day.” Reporting on the Fair’s construction in our March 1938 issue, we showed our own considerable excitement: “With lights and flame, motion and sound, this $175,000,000 show will dramatize the progress and the promise of science. It will reveal the World of Tomorrow as it is foreseen today.”

But as communication technologies evolved, the importance of World’s Fairs as the only points of exposure for such things diminished. And a general lack of enthusiasm for the Expos, abroad and most certainly at home, set in. New York’s second go-round in 1964-5 and Montreal’s Expo in 1967, home to Buckminster Fuller’s fabulous geodesic Biosphere, were among the last resonant World’s Fairs, although they continued to be held every five years (Knoxville! Sunsphere!). Indicative of the Expo’s fall from grace, less that ten years later the very same Biosphere–its acrylic skin stripped by a fire–served as a tattered, ruinous backdrop for post-apocalyptic cinema and television like Battlestar Galactica.

2010 marks an interesting resurgence. China has invested more state money in the Expo—$45-$60 billion is the unofficial range making the rounds–than it did for the 2008 Beijing Olympics. Granted, the Expo will last six months and not two weeks, but the number is still staggering. Writing in Canada’s Globe and Mail, Mark MacKinnon sees the Expo as a natural follow up to those impressive Games, noting that now, as opposed to thrusting itself onto the world’s main stage, it’s the world’s turn to come to China. In fact, MacKinnon smartly points out that 189 of the world’s 196 countries are represented here in some way, hoping to get a wink and a smile during future dealings with the world’s most rapidly expanding economy. 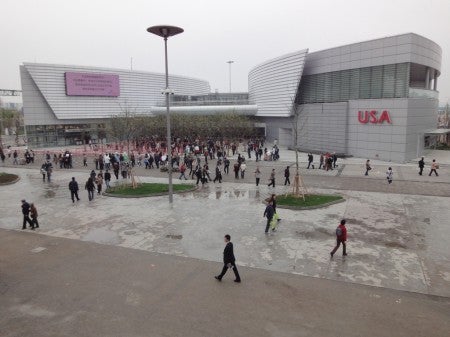 Which brings up the interesting case of the U.S. Pavilion. As Expos fell almost completely from the American radar, Congress passed a law banning the use of any public money to fund U.S. participation in World Expos, unless by special congressional decree. So, rather than being the nationally-backed showcase of everything that makes our science, technology and culture great, the U.S. pavilion in Shanghai and in all Expos prior is forced to cajole every dollar from private investments (often, somewhat ironically, from major corporations based in the host country–Toyota was a major U.S. pavilion benefactor for Expo 2000 in Aichi, Japan). In a piece for Foreign Policy, Adam Minter, keeper of the excellent Shanghai Scrap blog, delves even deeper into the somewhat shady tale of the pavilion’s conception and execution. Essentially, delays in fund raising, nepotism and general lack of attention until it was too late led to an exceptionally boring-looking U.S. pavilion. Supposedly representing an eagle’s spread wings, the drab, gray hulk’s main attraction is a film depicting a young girl’s dream to transform a vacant lot in her neighborhood into a garden. Coincidentally or not, the two primary organizers of the U.S. pavilion are former Warner Bros. executives.

I’ll withhold final judgment until I’ve checked out our pavilion for myself in the coming days. But judging by early looks of the competition, it’s disappointing that the U.S. didn’t aim for something riskier, something more imaginative. That is, after all, what a World’s Fair is all about.

With every element of China seemingly pegged to 11–the economy, prominence on the world stage, and cultural influence abroad–a World Expo bigger than any previous seems fitting. In our completely and fully networked present, does a World Expo still have the ability to captivate? If nothing else, Shanghai Expo 2010 gives almost every country on this planet a chance to express its uniquely vivid dream of the future, with one of world’s most futuristic cities as backdrop. Even by today’s standards, that spectacle should be something.

Our coverage of Expo 2010 from Shanghai starts tomorrow. Check back here all week for photos, videos and more.