Using Ultracold Atoms Instead of Electrons, Atomtronics Could Revolutionize Computing

The electron has been good to us. It has christened an entire field of both theoretical exploration and practical devices... 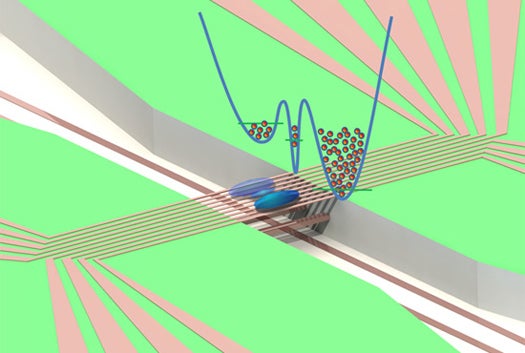 The electron has been good to us. It has christened an entire field of both theoretical exploration and practical devices — electronics — and has allowed us to leverage its most simple property, charge, to create complex devices and processing methods. But a group of researchers in Colorado think we’re selling ourselves short. By tapping the more complex properties of entire atoms, the field of atomtronics could completely rewrite the book on information processing.

Atomtronics is a relatively new field of study and one that hasn’t been very well explored, or even talked about at length it seems. But a group at the National Institute of Standards and Technologies in Boulder has been tinkering with the idea of using lasers to create systems that are analogous to electronic components using ultracold atoms and optical lattices rather than electrons, semiconductors, and logic gates for decades now.

Why try to manipulate ultracold, neutral atoms into performing tasks electrons do naturally without much fuss? Consider spintronics — devices that leverage electron spin that researchers say will revolutionize electronics due to the ability to encode information in novel new ways. By taking advantage of one extra characteristic of the electron, physicists think they can create smaller, faster, more powerful computing devices that will make modern gadgetry look like children’s toys by comparison.

Whole atoms, the NIST researchers say, are so much more complex than electrons that the promising possibilities of spintronics only scratch the surface of what’s potentially possible. Aside from the fact that neutral atoms are easy to isolate and could become key players in the quantum computers of the future, the optical lattices used to manipulate them can be rendered essentially without imperfections of any kind. But the diversity of the atoms themselves and the varying interactions between them — attraction and repulsion, for example — could all be turned to our advantage, allowing us to create ways of encoding, storing and processing data in ways that electrons can’t touch.

Over a couple of decades, the small group of researchers dabbling in this field has become really good at manipulating neutral atoms with lasers, but creating atomtronic devices that mimic their electronic counterparts isn’t exactly simple. Nonetheless, they’ve managed to create optical lattices with step-by-step energy differences that let atoms flow one way but not the other much like a diode, and they’ve even replicated the atomtronic versions of various logic gates. Future research will pursue further logic components, as well as a means to “cascade” the components into devices mirroring advanced electronics.

What they plan to do with all this know-how remains to be seen. The field gets relatively little study or attention — or funding for that matter — and we have no idea what an atomtronic computer might look like, or what it might be capable of. But we do know that atomtronics are possible, and those possibilities are certainly intriguing.