The glare that plagues watching television in otherwise pleasantly sunny rooms could soon become a thing of the past, thanks... 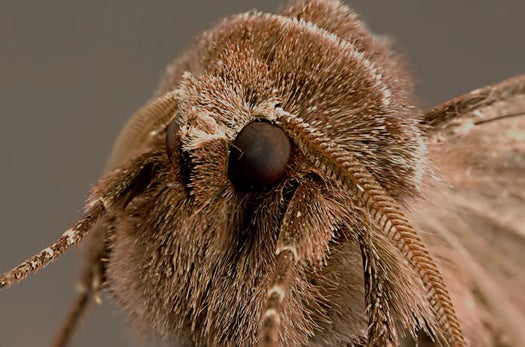 The glare that plagues watching television in otherwise pleasantly sunny rooms could soon become a thing of the past, thanks to the evolutionary prowess of a sunlight-shunning bug. Tapping the unique properties of moth eyes, a team of Fraunhofer Institute scientists may have figured out how to remove the annoying glare from all kinds of transparent plastic screens and other reflective products.

The idea of mimicking moth eyes isn’t entirely novel. For years researchers have sought to duplicate the anti-reflective patterns and textures in moth eyes that help them evade predators. The trick is in the tiny structures in their eyes, which are basically tiny bumps that just a few hundred nanometers tall. Because they are smaller than the wavelengths of incoming light, they don’t reflect well at all, letting all the light pass straight through without disruption. But while it’s possible to mimic this quality in materials, it’s not easy and they’re usually quite fragile.

The problem has generally been one of integrity; in order for the moth eye effect to work, the bumpy texture needs to be quite precise. If the moth-inspired bumps, pyramids, or meshes are pristine, they can cut the reflection rate of a surface to less than 3%. But materials scientists have found that etching the texture on the surface of a plastic after molding creates a fragile, scratch-prone finish. When trying to etch the patterns into the mold beforehand, researchers had a similar problem; small parts of the plastic would often stick to the mold, making the pattern imprecise.

The Fraunhofer team chose to take a new tack with the latter approach, developing a special coating that lines the injection mold before the plastic is pumped in. This coating picks up the very fine nano-structure pattern already etched into the mold and remains with the plastic after it solidifies, studding it with nanostructures. During the molding process, a second scratch-proof coating floods the mold, further coating the nanostructures to ensure durability.

The end result is a plastic coating that could be applied to everything from televisions and cell phone screens to the dashboard gauges and protective eyewear. The process should be cheaper than traditional anti-reflective varnishing and can be manufactured fairly easily by comparison. If so, the coating could allow for much more freedom in product design.

That’s not to say your next cell phone will be glare-free, as the process still needs a lot of refining. But by the time our 3-D, Web-enabled super-televisions of the future come down in cost enough for you to buy one, you might be able to put it in that sunny front room instead of hiding it in the basement rec room.