Bioelectric Nanotube Transistor Could Bring Biology and Machines Closer Together

Researchers at the Lawrence Livermore National Lab have taken a big step toward bridging the gap between mind and machine.... 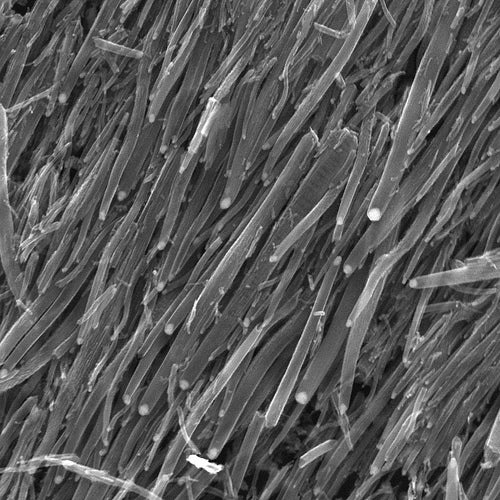 Researchers at the Lawrence Livermore National Lab have taken a big step toward bridging the gap between mind and machine. Using ATP – adenosine triphosphate, the molecular medium of energy exchange present in nearly all living cells – the team has created a novel transistor that could allow electronic devices that can be hooked directly into the nervous system.

The transistor, which creator Aleksandr Noy calls the first integrated bioelectronic system, consists of a carbon nanotube stretched between two electrodes that is wrapped in an insulator at both ends but exposed in the middle. The transistor is then wrapped in a lipid bi-layer akin to those that surround the cells that make up our bodies. When the team applied voltage to the electrodes and poured a solution full of ATP and potassium and sodium ions over the transistor, current flowed from electrode to electrode.

The magic is in the lipid bi-layer, which contains an ATP-sensitive protein that serves as a kind of ion pump when ATP is present. The lipid hydrolyses ATP molecules, with each occurence causing three sodium ions to move one way through the lipid and two potassium ions to move the other way, netting one charge across the bi-layer to the nanotube.

As for applications, the researchers think they’ve just scratched the surface when it comes to creating integrated bioelectric systems in which machines and living beings communicate in a more seamless way. It could lead to electronics that live permanently within the body without needing batteries or outside power supplies to operate. More importantly, it could lead to the Holy Grail of prosthetic research: mechanical devices that can be wired seamlessly to our brains.