And by football, we of course mean soccer ... er, football. 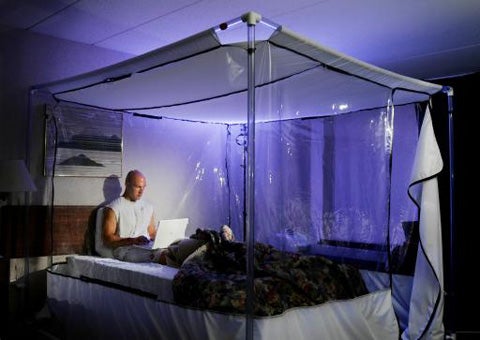 Athletic training needs a 21st-century twist when World Cup glory is on the line, and especially when the main event of football (soccer for U.S. folk) takes place in high-altitude South Africa this summer. That means some members of England’s star football squad will catch their shuteye inside special altitude tents designed to acclimate their body to the lower-oxygen conditions, according to the Daily Mail.

Tests showed that some of England’s footballers had more difficulty coping with the thinner air at the high altitudes for six of the 10 World Cup stadiums. That select group would spend eight to 10 hours per night for three to four weeks inside the altitude tents, so that their body can produce more red blood cells to compensate for carrying oxygen to their muscles.

Each hypoxic generator flushes 100 liters of air per minute through the tents at a set altitude. Other national competitors for the World Cup have also reportedly adopted the same practice.

David Beckham — currently on temporary leave from the LA Galaxy to play with AC Milan — spent some time in one of the tents to speed up recovery from an injury before the 2002 World Cup. And other footballers have similarly used the devices to help boost fitness and recover faster.

The Spoiler football blog notes that the World Anti-Doping Agency once considered whether the tents might represent an unfair advantage on the level of blood doping, but dropped the subject. Considering the race to keep up new blood-doping drugs and even gene therapy treatments, it probably has enough troubles on its hands.

[via Daily Mail and The Spoiler]