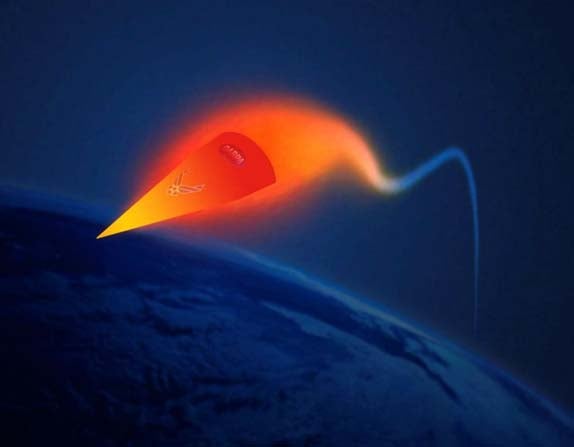 DARPA’s hypersonic glider, which launched last Thursday, evidently failed at some point during its mach-20 maneuvers. The vehicle’s signal was lost just nine minutes into the mission, according to the Santa Maria Times.

The Falcon Hypersonic Technology Vehicle (HTV-2) was designed to glide through the Earth’s atmosphere at speeds 20 times greater than the speed of sound. Such a hypersonic platform might pave the way for delivering precision strikes around the world without warning.

A Minotaur 4 rocket successfully delivered the HTV-2 to its starting point, where the glider was meant to use an autopilot system to conduct maneuvers such as turning to bleed off excess energy, along with short pitch, roll and yaw moves. But then satellites or ground stations monitoring the trial encountered the unexpected.

“Approximately 9 minutes into the mission, telemetry assets experienced a loss of signal from the HTV-2,” DARPA said. “An engineering team is reviewing available data to understand this event.”

The failure casts uncertainty over a second mission scheduled for 2011, given that DARPA said it depended on the outcome of the HTV-2 test. But at least the U.S. Air Force’s space plane which also made its debut on Thursday still seems on track, from all that we’ve heard.