Should I Be Worried About Electromagnetic Pulses Destroying My Electronics?

It depends on the source of the pulse. Electromagnetic pulses (EMPs) large enough to cause you trouble come in two... 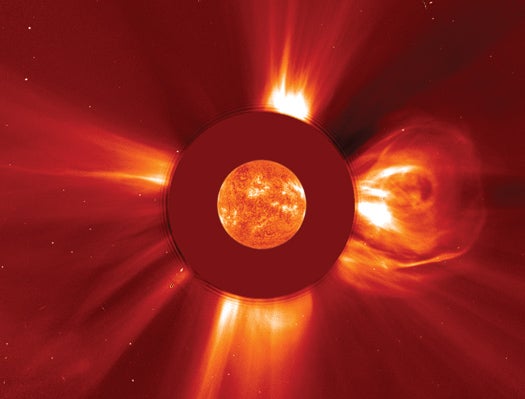 It depends on the source of the pulse. Electromagnetic pulses (EMPs) large enough to cause you trouble come in two varieties: those produced by the sun, and those created by a nuclear bomb or another military-grade emitter device. With the sun-related variety, specifically coronal mass ejections (CMEs), your gear will probably be fine. But a really large CME could take down the power grid, says Bill Murtagh, the program coordinator of the National Oceanic and Atmospheric Administration’s Space Weather Prediction Center.

Power lines transmit electricity as an alternating current, but a pulse from a CME can introduce a direct current into the system, says Luke van der Zal, a technical executive at the nonprofit Electric Power Research Institute. This can cause transformers to overheat and work sluggishly, or fail altogether.

Despite the grid’s numerous built-in safeguards, if enough transformers go down, they could take large chunks of the grid with them. The only way to get it running again would be to replace all the damaged gear. CMEs aren’t usually disastrous, but the two largest blasts on record, which took place in 1859 and 1921, could each knock out the Northeast power grid if they happened today. On the bright side, although CMEs have been known to put satellites out of commission, our atmosphere deflects most of the energy, so the radiation is too diffuse by the time it reaches your electronics to destroy them.

A man-made EMP poses a greater threat. If one goes off in your neighborhood, there’s a significant risk that the concentrated pulse will induce extra voltage in the circuit-board components, frying them for good. The best bet for protecting your electronics is to store them in a Faraday cage: a cube of interweaving metals, preferably copper and quarter-inch-thick steel, which together can act as an electromagnetic shield. Like in a lightning rod, the copper attracts electricity while the steel absorbs magnetic pulses. A cage big enough to hold all your favorite gadgets—your cellphone, TV, computer, and so on—runs in the neighborhood of $15,000. An EMP could also crash the power grid, so you might want to spring for an extra cage to protect your generator too.