Biomimicry isn’t new, nor are robotic hummingbirds, but the latest ‘bot to come out of Chiba University in Japan makes... 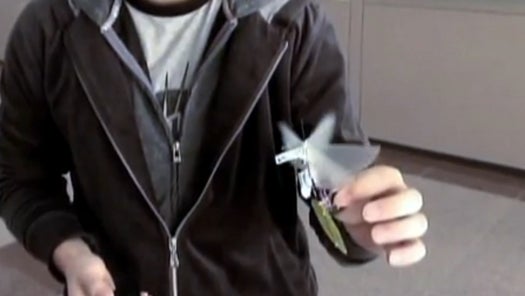 Biomimicry isn’t new, nor are robotic hummingbirds, but the latest ‘bot to come out of Chiba University in Japan makes even the DARPA-inspired Nano Air Vehicle — which is very cool, needless to say — look like last year’s robotics.

Weighing only 2.6 grams and controlled by an infrared sensor, the tiny four-winged ‘bot bobs and weaves through the air like a hummingbird, going as high as ten feet for up to six minutes at a time. By comparison, the makers of DARPA’s Nano Air Vehicle were still working toward a 10-gram design last we checked.

While Chiba’s robot has a hummingbird’s agility, it has not yet achieved the stationary hover that makes designs like this so exciting. However, researchers there plan to have it hovering very soon, and by 2011 they hope to have it hovering with a microcamera so it can relay images to its handlers.

The idea is to use the ‘bot in disaster scenarios in which search and rescue personnel need eyes in tight places or to perform recon in areas that are too dangerous for humans to go stomping around. But the military and intelligence benefits of a tiny, hovering robot like this are absolutely huge, offering an unparalleled means of surreptitiously looking around the next corner or inserting audio and visual devices into places where a special forces or intelligence operator might look out of place.

That is, until the army of cyborg insects spies is ready to deploy.