With cuts in the manned space program and the impending retirement of the Space Shuttle, NASA will soon face the... 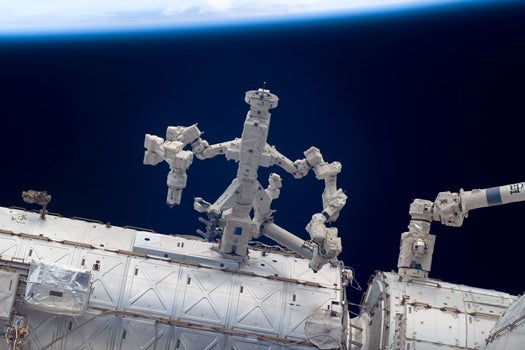 With cuts in the manned space program and the impending retirement of the Space Shuttle, NASA will soon face the need to repair satellites without the ability to send any astronauts to do it. Fortunately, they’re already working on the solution: robots.

Over the next seven months, NASA will finish installing the Dextre robot on the International Space Station (ISS). Once fully affixed to the ISS, Dextre, which previously helped astronauts repair the Hubble Space Telescope, will practice refueling satellites.

Once complete, Dextre will remove insulation from the outside of the ISS, disconnect safety wires, and eventually dock with and pump fuel through fuel ports on the ISS. The ISS fuel ports resemble the ports on most satellites, so Dextre’s operators can test different configurations for problems and efficiency.

For satellites, refueling represents a particular problem. Since the main operations of satellites rely on solar power, compared with the limited monopropellant fuel in the booster rockets, most satellites will run out of fuel long before some other component fails. That leaves refueling as a critical task in extending the life of a satellite. Where this refueling will actually take place, should the current tests prove successful, is still up for debate. We’re advocating fitting Dextre with his own rocket boosters (and maybe some coveralls), turning him into Earth orbit’s very own roaming full-service filling station.

With over 3,000 satellites currently orbiting the Earth, the need for repair work is higher than ever. By deploying robots to perform those repair, refueling, and reconfiguration tasks, NASA will save money, reduce the danger to astronauts, and free up humans for more ambitious and scientifically significant missions.