It must be fun to be NASA. In an attempt to make a lighter, stronger and safer crew vehicle for... 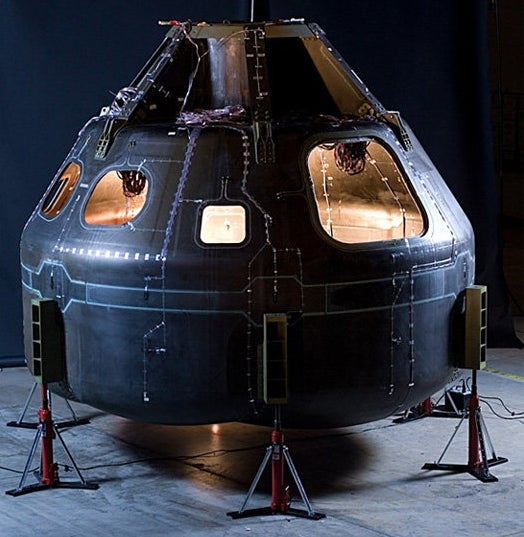 It must be fun to be NASA. In an attempt to make a lighter, stronger and safer crew vehicle for future manned space missions, they’ve been beating up on an all-composite version of the Orion flight crew module, the manned portion of NASA’s Constellation program. So far the vehicle has passed the structural stress tests with flying colors.

The Composite Crew Module (CCM) was designed to test new materials that might go into later versions of the Orion module, which will be constructed of both metals and composites. It benefits NASA to incorporate as many composites into the design as is reasonably possible, as they cut down on weight and therefore reduce mission cost. Fabricated by Alliant Techsystems, the CCM was constructed in two parts, with the top and bottom being fused together by hand using a honeycomb mesh of heat-treated carbon fiber and resin.

NASA’s Engineering and Safety Center (NESC) hooked the CCM up to a custom-built torture chamber to make sure it was up to the challenges of launch, space flight and re-entry. With more than 300 strain gauges, 80 acoustic sensors listening for fiber breakage, and a slew of video equipment in place on and around the module, the NESC crew pressurized the CCM to twice Earth’s atmosphere and put it through a battery of push-pull tests, which the capsule withstood in good form.

Of course, the NESC isn’t done kicking the CCM around. Future tests will see just how well the module stands up to exterior damage, culminating in test-to-failure that we like to imagine will be pretty amazing to witness. But the preliminary tests bode well for Constellation. With the Obama administration waffling on extra funding for NASA, keeping costs manageable will be key to keeping the program on track for planned future missions to the moon.