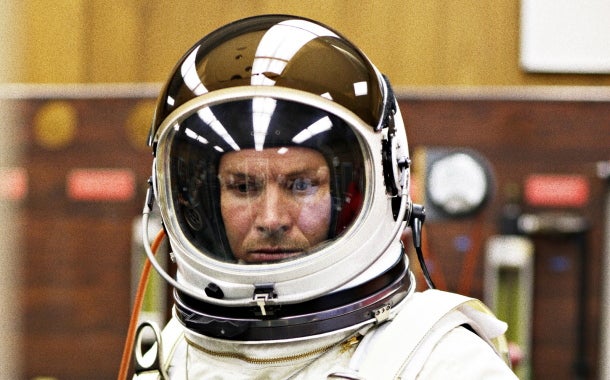 If Baumgartner, a world famous base jumper and skydiver, pulls off the feat, he’ll set the record for the world’s highest jump and become the first person to break the sound barrier with his body alone. During the jump, he’ll also collect data on how the human body reacts to a fall from such heights, which could be useful for planning orbital escape plans for future space tourists and astronauts.

Dubbed the Red Bull Stratos and sponsored by the energy drink company, the jump will send Baumgartner to the stratosphere in a small space capsule, lifted by a helium-filled balloon. Once he reaches 120,000 feet after three hours of ascension, ground control will give him the “all clear” sign and he’ll pop open the door and jump, as video cameras on the capsule and his suit record his descent. Within 35 seconds or so, Baumgartner will hit supersonic speeds and break the sound barrier. No one really knows what will happen at that point, but the scientists seem confident that he’ll maintain consciousness. He will free fall for roughly six more minutes, pulling his chute at about 5,000 feet and coasting for 15 minutes back to solid ground.

Just what happens to his body as it goes from subsonic to supersonic and back to subsonic speed is of great interest to scientists, and so he’ll be hooked up to an electrocardiogram monitor during the jump. He’ll also be outfitted with accelerometers and GPS units to confirm his acceleration and speed, and from that the stress on his body. But that’s pretty much it for gear—because he’s wearing a pressurized suit filled with 100 percent oxygen, his crew is rightly wary of putting too many electronics and power sources in his suit that could accidentally set him on fire. Any data they collect will then be made public and turned over to the military and NASA.

The plan is to make the jump sometime in 2010. After they complete test jumps at 25,000, 60,000, and 90,000 feet, they’ll watch the Doppler radar and wait for calm weather and then pick the launch location, which for now they can only say will be somewhere in North America. The goal is to drop Baumgartner near the launch site, but even with low wind conditions he could drift some 150 miles away.

But first they have to test all the gear to make sure that it will work as it transitions from the freezing, no-pressure environment at 120,000 feet to the extreme heat of the dive. It’s the same as with any other flight test program, says Jonathan Clark, the team’s medical director (whose work in high-altitude space jumps we profiled in 2007). “Only in this case, Felix Baumgartner is the aircraft.”

Red Bull as put together this video, putting everything into perspective: