New technology adds flexibility to wireless communications, and can passively monitor the integrity of bridges and other structures 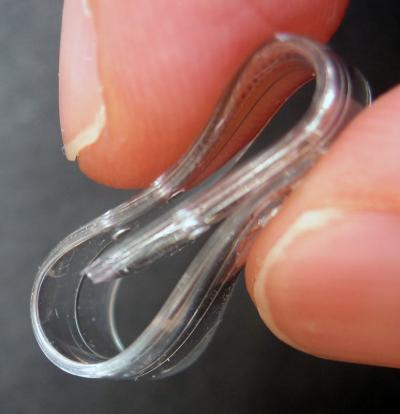 The large antennas that used to be part of our everyday lives — atop the TV, on the boom box, telescoping into the bricklike handsets of our first cordless phones — have largely been re-engineered over the past two decades to live inside our devices. But the malleable copper and other metals used in standard antennas are somewhat restricting; they can only be bent and straightened so many times before they break.

Using a novel manufacturing process, a group of NC State researchers have created shape-shifting antennas that can be bent, cut, twisted and even stretched, and will return to their original shape.

The durable antennas are made by injecting a liquid metal alloy into elastic casings made of various materials, depending on the specific qualities the user wants. The gallium and indium alloy remains liquid at room temperature, taking on the physical flexibility of the surrounding material. Elastic silicone is good for making very flexible wire-like antennas, and other materials could be custom tailored for specific uses with applications far beyond mere communications.

For instance, the military could roll large antennas up into small packages for deployment, then quickly unroll them to set up a field communications center rapidly. The antennas could also be used to keep tabs on the integrity of naval vessels like submarines. Since its shape dictates an antenna’s frequency, it could be embedded into the hull of a vessel; should any deformation occur, the frequency would change, alerting crews to the damage.

The same principle could have myriad civilian applications as well. Antennas built into civil infrastructure like bridges and tunnels could alert authorities if support structures begin to break down. Imagine the tragedy that could’ve been averted if the government had a means to detect the design flaws that brought down the I-35 bridge in Minneapolis in 2007, or the gridlock (and near tragedy) that could’ve been avoided on the San Francisco Bay Bridge in October had someone realized a part of the bridge was on the verge of falling.