Resilient Space Internet Comes Down to Earth Gadgets with Android 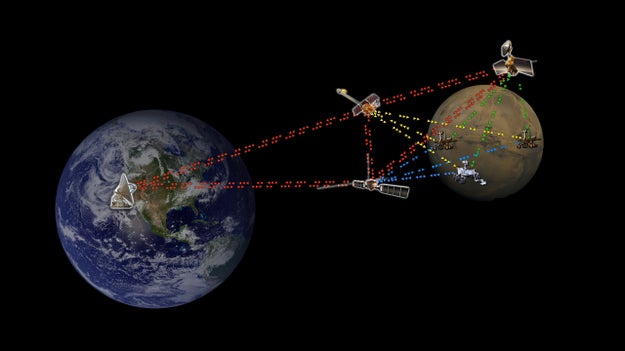 Google’s Android does a lot more these days than just smart phones and nifty mobile gadgets. An Internet pioneer is using the platform to launch a interplanetary Internet protocol on Earth that could harden wireless networks against delays in data transmission.

Vint Cerf worked with NASA’s Jet Propulsion Laboratory on the TCP/IP protocol that all netizens rely upon today, and tried adapting the old reliable for NASA’s interplanetary communications with distant spacecraft. But complicating issues such as planetary rotation and the long distances involved — 40 minutes roundtrip for data traveling at light speed between Earth and Mars — led Cerf to design a new Internet protocol that does not require a continuous connection.

The Disruption-Tolerant Networking (DTN) protocol works pretty much as advertised. It deals with delays in interplanetary communication by forcing its nodes to hold onto data packets until connection has been restored, and then resumes transmission. The Register reports that Cerf’s team is testing the new protocol on outbound space platforms headed for destinations 80 or 90 light-seconds away from Earth.

Now Cerf has also added DTN to Google’s Android as an application platform for the open-source operating system. His team has already tested the protocol in northern Sweden on laptops speeding away from each other in all-terrain vehicles.

This is just the latest example of Android’s usefulness beyond the mobile market. E-readers ranging from Spring Design’s Alex to the multi-touch Barnes & Noble hybrid known as the Nook also use Android. Even the military has seized upon Android as the platform for keeping warfighters connected with their drone buddies high in the sky.

At the very least, the space-faring DTN protocol shows that not even the sky’s the limit for Android.