He started as the Jet Man and became a wet man. Just more than a year after becoming the first... 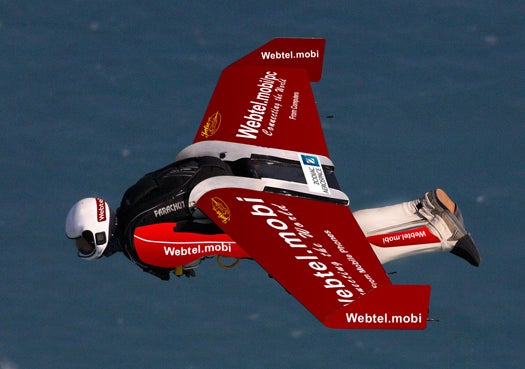 He started as the Jet Man and became a wet man. Just more than a year after becoming the first person to cross the English Channel using a jet-powered wing, Swiss adventurer (and former PopSci cover star) Yves Rossy ditched into the Atlantic while attempting the first intercontinental jet wing flight.

Rossy disappeared from live television feeds just a few minutes into the flight; he was next seen swimming next to his parachute in the Atlantic as a rescue helicopter prepared to winch him out of the drink. He appeared to be unhurt, but the reason for his ditching is unclear; the Twitter feed following the crossing noted clear skies and calm sea, though it also reads “winds were certainly difficult today.”

Rossy had planned to cross the 24 mile expanse across the Strait of Gibralter at 140 mph after leaping from a jump plane over Tangiers, Morocco. He should have arrived at his landing site at Atlanterra in southern Spain 13 minutes later, but that landing will have to wait for another day (and perhaps another wing).

The 6.5-foot carbon-fiber wing straps directly to Rossy’s back, is powered by four small jet engines and is controlled by the shifting of his body, so needless to say, there was plenty that could have gone wrong. Before the flight, Rossy told the media “there’s always plan B. I can ditch the wing and open the parachute. If I land in the water, there are people to come get me.”

Unfortunately, it was a plan B kind of day.