Darpa Seeks New Round of Proposals for Universal Biosensor

Got a great idea for an antibody biosensor but unsure what to do with it? Darpa wants you. The Department... 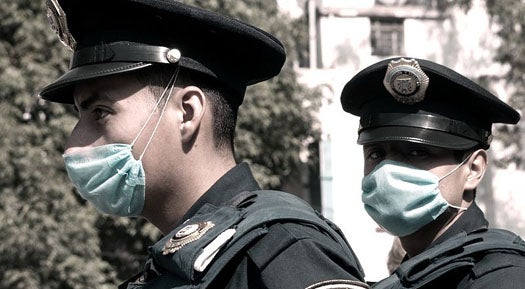 Darpa is seeking proposals for a antibody biosensor that can effectively identify a wide range of bio-threats. Sari Huella
SHARE

Got a great idea for an antibody biosensor but unsure what to do with it? Darpa wants you. The Department of Defense’s future-tech wing is seeking proposals for its newly inaugurated Antibody Technology Program, the latest bid for technologies that can pinpoint specific biological agents ranging from bioterror threats to swine flu.

Darpa has requested better biosensors before, during the post-9/11 anthrax and bioterror hysteria, at which time it sought a single device that could detect a wide array of bio-agents. From those contenders, it would seem antibody biosensors have proven to be the best biosensors for detecting wide-ranging threats, as Darpa has narrowed the search.

Antibodies, manufactured by the body in response to specific threats called antigens, are good at sniffing out foreign or bacterial invaders. Antibody biosensors leverage this talent for locating antigens into a device medical and security personnel can use to detect threats. However, each antibody is pre-programmed to bind to a single antigen. But after some lab tinkering, antibodies can be manipulated to bind with several different antigens, and that’s where Darpa sees potential. Create a single “super-antibody” that can bind with millions of antigens, and we could quickly have a biosensor that can identify and distinguish between all kinds of threats quickly and reliably.

But as with all things Darpa, serious obstacles lay in the path of those hoping to have their projects funded with defense dollars. Anibodies don’t keep well, lasting only a few weeks in storage and reacting poorly to temperature extremes. Darpa wants further molecular manipulation to ensure the new biosensors will work for five years in the field and function in environments ranging from 77 to 158 degrees Fahrenheit. It’s a tall order, but lab-manufactured antibodies are becoming cheaper and easier to finesse by the day.

It’s not as sexy as the next advanced weapons system or cars that drive themselves, but given the threats facing America in the 21st century, a reliable biosensor could prove to be the most effective tool in Darpa’s toolbox.