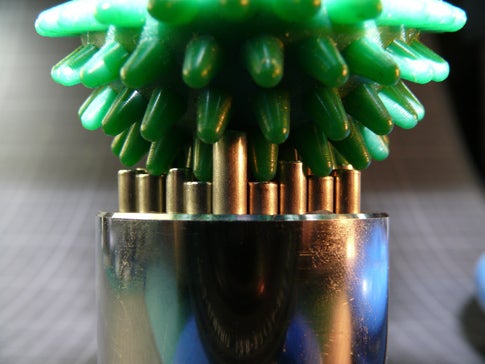 Werner O. Merlo’s patio umbrella refused to stay locked in a tilted position. Frustrated, he replaced the sagging sunshade’s flimsy ball-and-joint with a self-designed mechanism that swiveled smoothly yet held fast at an angle. His umbrella never flopped over again. “I’m not really the umbrella-manufacturing type, so the first thing that came to mind was, What else can I use this for?” says Merlo, a former chemist at the University of Alberta.

The answer turned out to be: just about everything. An automated version of the joint is drawing interest from researchers at Johns Hopkins University, who are working on robotic prosthetic limbs, Pentagon officials developing bomb-diffusing robots, and roboticists designing new versions of Canadarm, the crane-like robotic arm on the International Space Station. Merlo is also in talks with companies to incorporate a manual model into camera tripods, flat-screen TV mountings and, of course, patio umbrellas.

The Robo-Flex, as he calls the device, is attracting attention because it solves the classic problem for ball joints—they swivel easily, but holding one in a set position requires constant force, the way your muscles must stay flexed to extend your arm. Doing so for robotic arms usually requires lots of energy and several bulky joints to hold weight at different angles. Merlo’s solution was to cover a small titanium ball with nubs. The ball rolls smoothly in a socket lined with stainless-steel pins. Extend the pins, and they interlock with the nubs to prevent the ball from moving. Built into a prosthetic wrist, the joint requires no energy to stay locked and can support a 500-pound load. Not bad for an afternoon in the backyard. 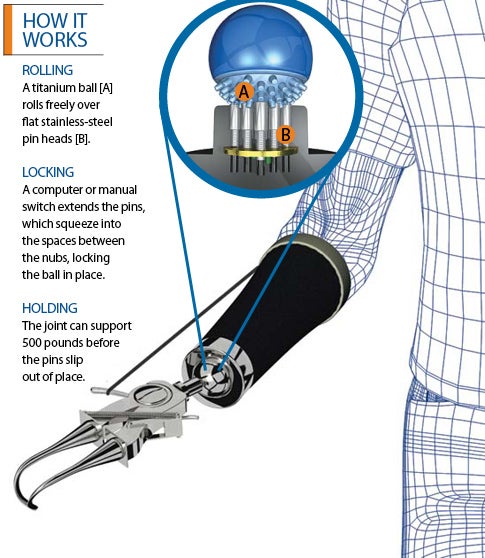 Robo-Flex Joint: How it Works